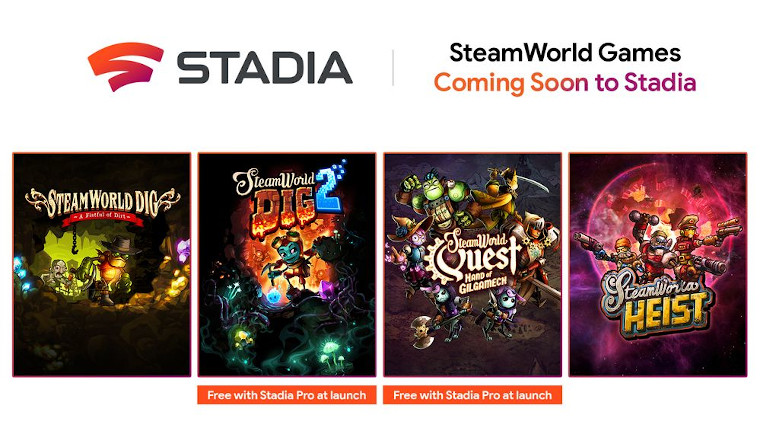 While the SteamWorld titles will arrive soon, Google also hyped up the fact that Watch Dogs Legion and Cyberpunk 2077 would be arriving in the year among other games. In the meantime, if you’re remotely interested in any of the SteamWorld titles and want to know more about them, here are some summaries and trailers:

SteamWorld Dig is a platform mining adventure with strong Metroidvanian influences. Take the role of Rusty, a lone mining steambot, as he arrives at an old mining town in great need. Dig your way through the old earth, gaining riches while uncovering the ancient threat that lurks below…

SteamWorld Dig 2 takes you on a platform mining adventure forged in Metroidvania flames. When an old trading town is struck by mysterious earthquakes, it’s up to a lone steambot and her unlikely companion to uncover what trembling terrors lie beneath.

As the captain, you board, loot and shoot your way through enemy spaceships. Overcome the challenges of the vast frontier by upgrading your recruits with unique abilities, weapons – and even stylish hats!

SteamWorld Quest: Hand of Gilgamech is the roleplaying card game you’ve been waiting for! Lead a party of aspiring heroes through a beautifully hand-drawn world and intense battles using only your wits and a handful of cards. Take on whatever threat comes your way by crafting your own deck choosing from over 100 unique punch-cards!

What awaits you is a luscious treasure chest filled with gold, dragons, vivid worlds, magic, knights in shining armor as well as XP, turn-based battles and all that good RPG stuff! The game’s humorous mix of traditional fantasy and steampunk robots makes for an unforgettable experience with lots of laughs.

The pricing for these titles has not yet been revealed, we’ll probably have to wait for them to show up on the Stadia store to find out how much they’ll cost.