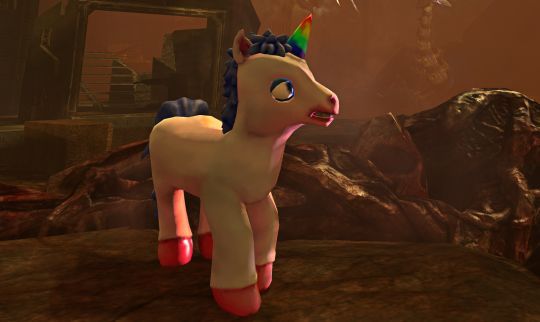 Red Faction Armageddon is due out on June 7 and today a playable demo of the sci-fi first person shooter was made available for download for the Xbox 360 console (sadly there's no PC demo planned for release). Today publisher THQ announced that if the demo gets 1 million downloads it will add a rather cute and sweet but highly destructible weapon to the game: Mr. Toots.

The new weapon is an extremely adorable looking unicorn that fires a rainbow-like beam of light hat destroys pretty much everything in its path. As THQ's press release announces, "Never before has hyper-colored flatulence wrought such destruction, and, for the colonists of Mars in Red Faction Armageddon, inspiration."

In fact Mr. Toots has made an earlier appearance on the internet. On April 21, the YouTube video comedy series launched by "Freddie W" released a video called "Unicorn" where a man gets Mr. Toots by winning an internet contest. Mr. Toots then proceeds to pretty much destroys the entire city block. You can check out the video over on Freddie W's YouTube page along with a behind the scenes video. As revealed in that video, the actual unicorn model was provided to the video team by Volition, the developers of Red Faction Armageddon, after the team saw it and requested it.

This is not the first odd weapon that has been put into into a Red Faction game. For the 2009 released Red Faction Guerrilla, Volition came up with the unlockable Ostrich Hammer which allows players to destroy environments by swinging the body of an ostrich bird.