I wanna be a pirate! And really, who hasn't, at one point or another, wanted to be a pirate? If you, too, also want to be a pirate, then 1990's The Secret of Monkey Island could be for you (check with your doctor before using Monkey Island, and seek medical help right away if you experience a gaming session lasting over four hours).

Much like yourself, there was once a young flooring inspector known as Guybrush Treepwood who wanted to be a pirate. Yet the would-be pirate's quest was interrupted when his would-be love, governor Elaine Marley, was kidnapped by the evil undead pirate LeChuck (not to be confused with a woodchuck who would chuck if a woodchuck could chuck wood, as long as a woodchuck would chuck wood), who coincidentally died a horrible undeath while attempting to win the love of said Ms. Marley.

With his knowledge of the secret art of sword fighting, the hero Guybrush Threepwood fought his way through the minions of the evil LeChuck using his secret cow-fighting-love-maker sword fighting technique, only to be captured by a tribe of cannibals whom he was very happy to see.

But seriously: 20-something years later, The Secret of Monkey Island is still one heck of a game. The bizarre jokes are still just as funny as the day they were written, and it's definitely one of the finest, and most user friendly, adventure games out there, with a ton of easter eggs for fans of other LucasArts (or TaleTell) games. It's really one of the best pirate games out there.

In fact, if we didn't know better (we don't), we might even say that Pirates of the Caribbean could just about be Monkey Island if you changed a few names around. Davy Jones practically is LeChuck (Elliot has gone on the record saying he would've given LeChuck a tentacle beard, too, if he'd thought of it). 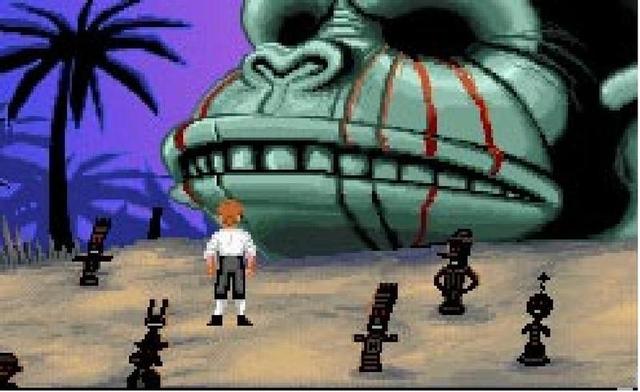 And since it's a well known fact that you should never pay over $20 for a computer game (just ask Guybrush), you can get this classic, complete with enhanced graphics and voiceovers - and yes, the originals are still there if you prefer them - for a mere $9.99 on Steam, the Apple App Store, and on fine gizmoidal gadget devices like the Xbox 360 or PS3.

Finally, we're gonna leave you with a selection of some Monkey Island funnies, with a few minor spoilers, courtesy of YouTube:

Images via MobyGames and The Easter Egg Archive