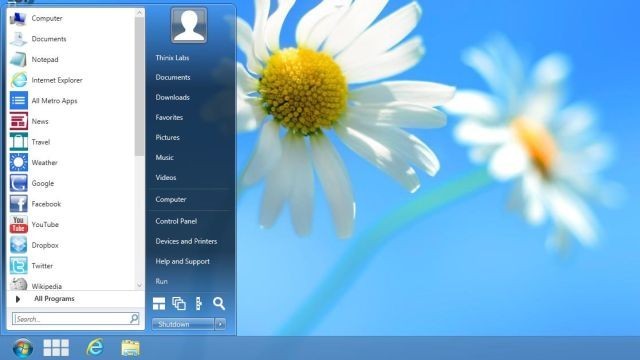 Software developer Thinix launched its Windows 8 Start menu program RetroUI several months ago, and in February, it launched version 3.0 with a number of new features and a revamped design for its Start menu. Now the company has launched a new update for RetroUI, which brings its version number up to 3.1.1.

The patch notes for the new version show that RetroUI's Start menu has received some "significant internal improvements and optimizations." Thinix says that the Start menu not only loads up to 50 percent faster than previous versions, but it also uses 35 percent less system resources. Business users of RetroUI can now edit the Start menu configuration file in this new version and those customers can also lock out employees from adding or changing the Start menu on their PCs.

RetroUI 3.1.1 also now allows users to not show any Modern Windows 8 apps from within the Start menu but still allows those apps to be pinned. This feature has been added to help performance on PCs with older hardware. Other new features in RetroUI 3.1.1. include adding a splash screen when the Start menu loads up, the addition of blank buttons in TabletView and more; there's also been some bug fixes and some speed improvements for Modern apps.

RetroUI is available for download now for $4.95 for use on one PC or a version for $9.95 that can be used by up to three PCs. You can also get a seven day free trial version and there are other versions made for business and educational use.