Internet freedom activists have been trying to get the RIAA and their ilk to realize the total ineffectiveness of legislation in their battle against piracy, but it turns out that they’ve actually known it for a while now, as lamented in a newly leaked (and incredibly tacky) presentation by RIAA Deputy General Counsel Victoria Sheckler.

The presentation, which was given to members of the ISPI (International Federation of the Phonographic) back in April, points out that even if SOPA and PIPA had become law, they wouldn’t have actually done much to combat piracy; “Legislation,” Sheckler says, “[is] not likely to have been effective tool for music.”

That’s in pretty stark contrast to the words of Sheckler’s own boss, RIAA Chairman Cary Sherman, who said in a letter to the New York Times last December who said it was ‘unacceptable’ that any foreign site “hawking American products or copyrighted works can escape our current laws.” Sherman also took time to praise legislation (unnamed, but obviously referring to SOPA) that could supposedly crack down on piracy, defending it against claims that it could stifle free speech. 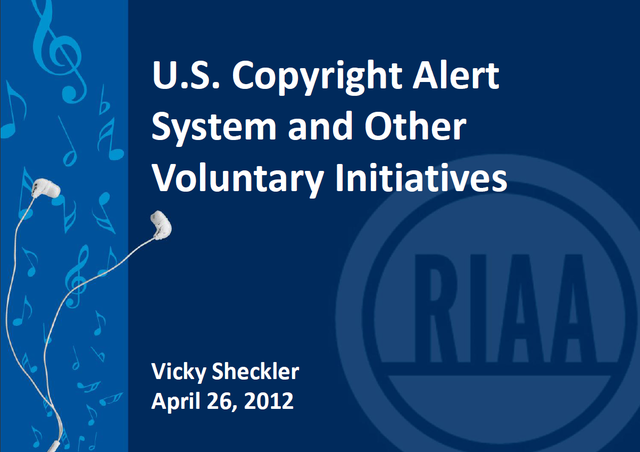 The leaked presentation contains a ton of other interesting information, like the RIAA’s plans for future anti-piracy efforts. Besides celebrating victories like the shuttering of LimeWire, the rest of the presentation mostly focuses on the ‘6 Strikes’ process, which would discourage piracy by warning and degrading the service of users who are caught pirating, and even totally terminating the internet access of ‘repeat offenders.’

One last nugget: the RIAA blames Google for SOPA and PIPA’s failure, with one slide claiming that “Opposition to bills, activated by Google, went viral & bills are essentially dead.” Apparently the RIAA is unaware of just how big the backlash generated by SOPA was, and now believes that pro-piracy forces are now manipulating the masses by using the boogeyman of SOPA to block any future anti-piracy legislation. Go figure.

You can check out the entire presentation for yourself here, and be sure to head over to TorrentFreak for their more in-depth analysis.