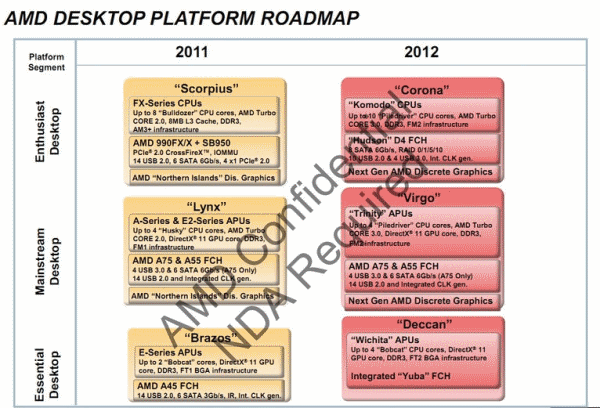 PC makers may not be selling as many desktops as they used to, thanks in part to higher sales of devices like smartphones and Apple's iPad. However that isn't stopping PC processor makers from developing plans to make new and even more powerful PC CPUs. PC Gamer reports that a leaked processor road map from AMD reveals that the company is working on a desktop CPU with a whopping 10 processor cores inside.

The roadmap, which first appeared on a Chinese news web site, shows that the 10 core CPU has the rather appropriate code name "Piledriver". It's designed to be a variation on AMD's previously announced "Bulldozer" CPU which is scheduled to launch with eight processor cores later this year. The Piledriver CPU will also use a new motherboard design called the FM2. The article adds that the roadmap also includes the Trinity CPU/GPU hybrid which is also supposed to use the same design as the Piledriver CPU along with the FM2 motherboard.

In an era where not too long ago having a quad-core CPU inside a gaming PC was a huge deal the prospect of being about to purchase a desktop gaming PC with a whopping 10 core is certainly a major one. It will be interesting to see what the pricing will be on such a processor and if PC game developers will take advantage of having so many cores to work with. AMD recently announced that it had brought in $1.57 billion in revenues for its latest quarter.