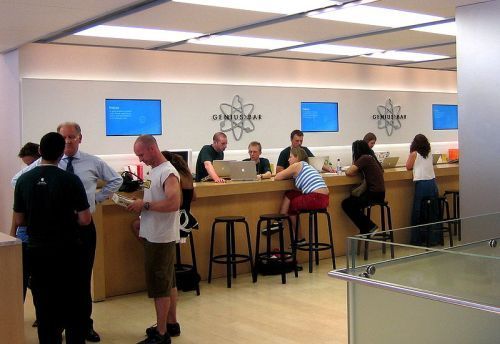 Rumors have been flying across the internet in the past few days about a major event that could be happening on Sunday at Apple's many retail stores, just a few days after the 10th anniversary of the opening of the first Apple stores on Thursday, May 19. Now web site 9to5Mac.com is reporting via unnamed sources that the big Apple event may just be the reveal of "Apple Store 2.0".

According to the story, the revamp of the retail stores was lead by Apple CEO Steve Jobs (of course) along with the company's design chief Jony Ive and Apple’s Senior VP of Retail Ron Johnson. Previous rumors have stated that some of Apple's store employees will have a late night work session after the stores close on Saturday night and that black curtains will be put in place to keep the general public from seeing what's going on until Sunday morning.

The 9to5Mac.com story claims that when Apple Store 2.0 does launch, the paper signs that used to be in the store will now be replaced with working interactive iPads. Some store locations will also have new and "huge" displays and new sound systems, according to the report. New areas called "Startup Sessions" will also be put in place for the Apple Store's personal setup service. Finally the story claims that Apple could launch a new Apple Store app for iOS devices on Sunday. The app will know which Apple Store a person was located in, among other features.