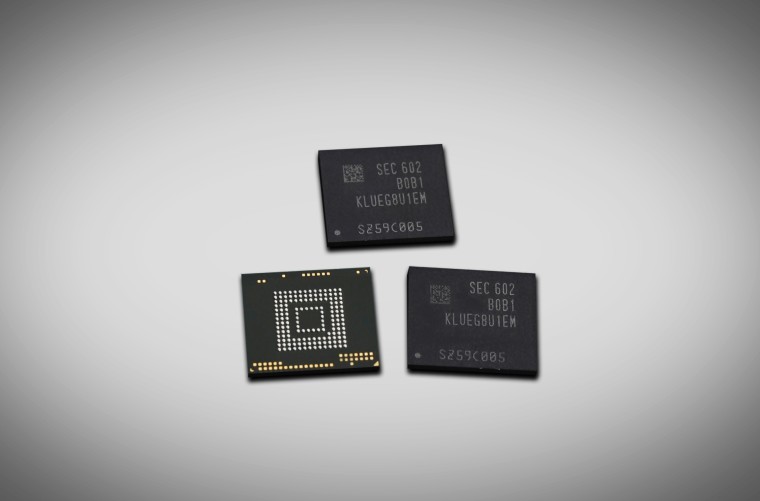 While many of you probably dream of having a smartphone with better battery life, Samsung's announcement on Thursday is about bringing bigger capacity flash storage to your next mobile devices, in a package that is "smaller than an external micro SD card".

The Korean tech giant has started mass producing a new 256 GB embedded flash storage chip that could very well land on the iPhone 7. It is based on the company's bleeding-edge V-NAND technology, which is what allows for better density memory, as well as improved reliability.

The new memory chip uses the Universal Flash Storage (UFS) 2.0 standard interface, and Samsung claims it is "nearly twice as fast" as SATA SSDs in terms of performance. It uses two lanes in order to reach sequential speeds of up to 850MB/s for reads and a more modest 260MB/s for writes, which is arguably fast when compared to Samsung's full-blown SATA SSDs.

What is actually more impressive about the new chip is the ability to handle "up to 45,000 and 40,000 input/output operations per second (IOPS) for random reading and writing respectively", which should allow you to watch a 4K Ultra HD movie without problems while doing other tasks.

When integrated into a smartphone that supports USB 3.0, the new memory chip should allow transferring a 90-minute 1080p movie (estimated by Samsung at an average file size of 5GB) in about 12 seconds.

What does all of this mean for you, the consumer? Well, as mobile operating systems get bigger and more complex, they will require a bigger chunk of the internal storage - which is usually a modest 16GB, and that leaves little space for your increasing needs, like installing more apps and games, or shooting 4K cat videos. MicroSD cards can help, but they're much slower than internal storage.

How much storage space do you need on your smartphone? Let us know in the comments below.