Samsung may not be revealing its Galaxy S IV smartphone at the Mobile World Congress this week, but the company is using the Barcelona trade show to introduce the newest member of the Galaxy Note tablet family; the Galaxy Note 8.0. 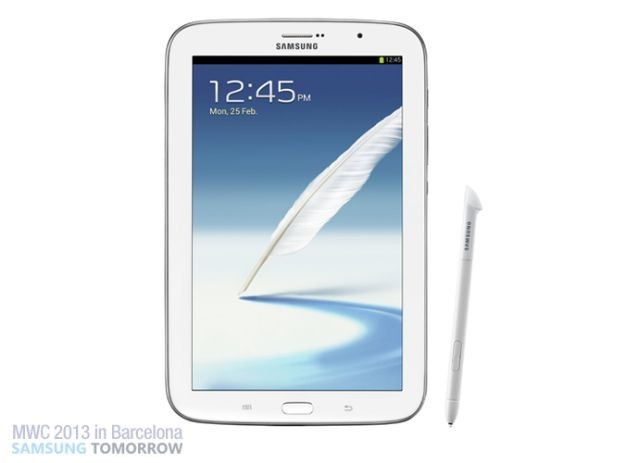 Samsung's press release states that the 8 inch tablet, with a 1280x800 resolution, will join the already launched Galaxy Note 10.1 sometime in the second quarter of 2013. As with previous Galaxy Note models, the new tablet will include the S Pen stylus that will be supported by a number of different applications. Samsung says that the stylus can be used to control the physical menu and back buttons on the Galaxy Note 8.0 with WACOM technology.

The tablet can also be used as a remote control for a TV or other living room boxes with the new Smart Remote software and there's a new optimized eReader application for better reading support. In terms of the hardware inside, the Galaxy Note 8.0 will have a 1.6 Ghz quad-core processor, 2 GB of RAM, either 16 or 32 GB of on-board storage (with a microSD port for adding more space), a five megapixel rear camera and a 1.3 megapixel front camera.

The Galaxy Note 8.0 will support both WiFi and HSPA+ so technically, you should be able to use this tablet as a really, really big smartphone. Engadget reports that Samsung will launch a WiFi only version for the US, along with a LTE version. A specific launch date and pricing for the tablet was not announced.