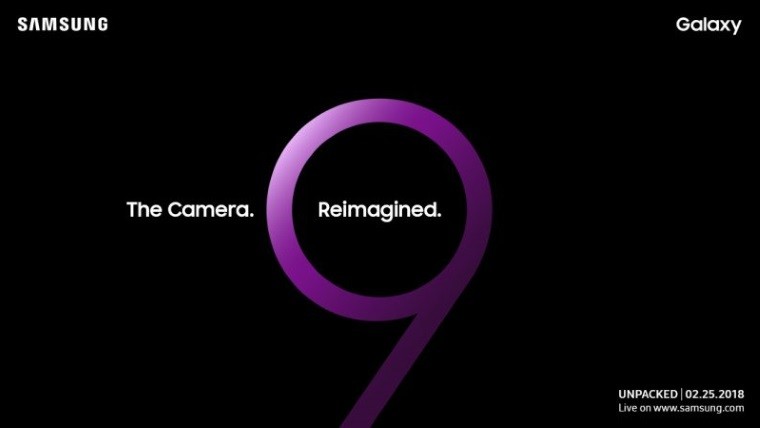 Samsung has sent out press invites for its unveiling of the Galaxy S9 at the Mobile World Congress (MWC) in Barcelona. It will take place at a "Galaxy Unpacked celebration" at 12 p.m. EST on February 25, 2018 (6 p.m. CET).

The interesting part from the above image is the emphasis on the camera tech, with Samsung calling it "Reimagined". It also lends credence for the upgraded camera specs leaked via a shot of a retail box (pictured below) in which a "Super Speed Dual Pixel 12MP" camera is specified and features optical image stabilization with an aperture of F1.5 / F2.4. This goes in line with previous rumors hinting that Samsung will deploy a dual-lens camera technology with a variable aperture on its upcoming flagship device. A larger aperture will allow users to capture better images in low light conditions. So, an adjustable aperture means that users will be able to capture images with different effects and lighting conditions.

Other rumors indicate that in terms of looks, the Galaxy S9 will not look too different from the 2017 Galaxy S8, and as per the above image, the handset will come with a 5.8-inch Quad HD+ Super AMOLED display as well as 64GB of internal storage, 4GB of RAM, iris scanner, and stereo speakers by AKG.

Live streaming of the Barcelona Unpacked celebration will also be available at Samsung U.S. Newsroom, Samsung.com/galaxy, and the Samsung Mobile Press sites.