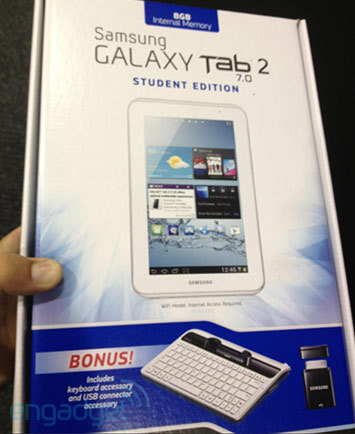 Apple's iPad is the king of education-friendly tablets. The iPad has become a popular part of a student's arsenal, and it seems that Samsung want to get into their market here.

An anonymous tipster posted images of Samsung's Galaxy Tab 7.0 tablet, identified as the 'Student Edition'. The edition is meant to release on August 19th. Interestingly, it maintains the $249 retail price of a standard Tab 7.0, but comes with a keyboard dock and USB connector. The dock and connector are both extras you have to buy separately with a normal 'GTab 7.0', as they're often abbreviated to.

The Nexus 7 is the other big seven inch Android tablet - due to its lower price point, it seems to be the choice people might choose to make. Samsung is definitely taking an unusual approach here, by undercutting their own product with a version offering more features for the same price. Quite a peculiar business decision, though it may be a conscious effort to reorient the Galaxy Tab 7.0 as something a student should own.

$249 is the standard retail price of the 8GB model that does not include 3G connectivity. No word yet on whether the Student Edition comes with more memory or not, but even if you're not a student, the Student Edition represents better value. Why would you buy anything else?