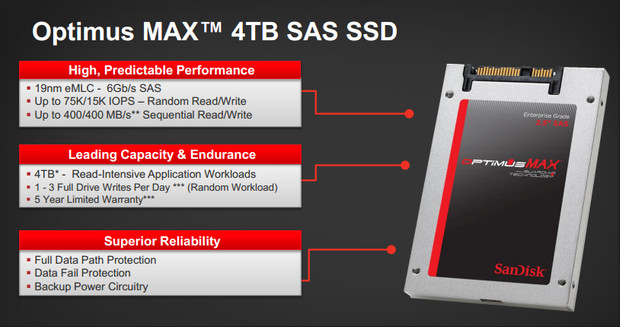 There has been an unspoken competition between manufacturers when producing Solid State Drives (SSD's). Companies to the likes of Corsair, Samsung and Kingston have battled it out for impressive write speeds and, of course, storage capacity. However SanDisk takes the crown when it comes to storage space after their latest revelation: the 4TB Solid State Drive. Although the pricing is unknown SanDisk claims "high performance at consumer cost".

Working in conjunction with their latest “Guardian Technology Platform”, the write speeds and memory density outperforms the rest of the market. The drive could very well begin replacing the standard HDD for a high spec (and slightly overkill) SSD, as the major setback for SSD uptake has been the storage capacity in comparison to traditional drives. SanDisk also plans on bringing 8TB and 16TB models to market in the future, all of which should come in the same popular 2.5" form factor.

Along with this introduction SanDisk have announced their updated Optimus product line, of which all feature compatibility with 19nm MLC NAND flash hardware - the technology that allows for the impressive performance in all their latest models. Variations include the Optimus Eco, Ascend, Ultra, and Extreme.

There’s no denying that these high capacity drives will most likely put a dent in your wallet, but as they consume minimal power and produce very little heat, they may be very well worth the initial cost. SanDisk are also providing a free 5 year warranty or “until the drive dies” which should be expected due to the nature of the top-end SSD.

The exciting prospect of large drives could not only be used for server or corporate deployment, but could provide extensive storage for our ever growing media collections that many of us take for granted. SanDisk have been in the market for quite some time now, at one point there were even talks about Samsung buying the company around six years ago, but it is clear that they are capable of pushing the boundaries by themselves.