Android is a great platform for modifying, and various phones have their own enthusiast communities. Not everyone wants to modify their gear, fearing voided warranties or future issues that may arise. Backing a phone up makes some sense; much like a Restore Point in Windows, it'll provide some security if anything goes wrong. The only downside is that backing a phone up does require root access... at least, that used to be the case.

Simple Android Backup was created by an XDA forum member in an attempt to bring backups to non-rooted Android devices. The program uses the tried-and-true ADB Backup methods and is at a point the developer considers to be an open beta. Testing has only been done with the developer's personal ZTE Skate handset, so complete compatibility cannot be guaranteed. 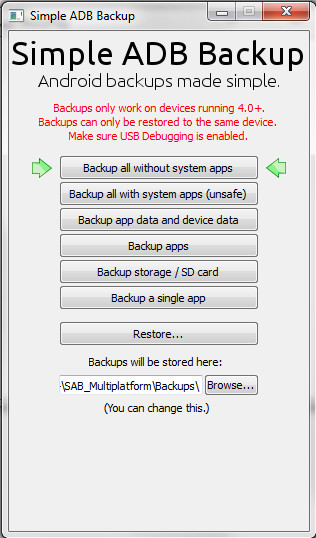 There have been manual guides pre-dating both programs, if you'd like to do it this way. Some phones are incompatible with both programs: HTC's One series and Sony's 2011 handsets don't play too nicely with ADB Backup.

The reminder that this program is still an open beta is worth reading.

Superuser functionality is required for some functions, so you can't do absolutely everything with a device that isn't rooted. My Galaxy Ace is trapped on 2.3, so I could not test the program for myself. Even so, it's hard to ignore the awesome potential for owners of the Nexus 4 and other current high-end Android smartphones.

For many Android phones, modification is limited by the locked bootloader. The bootloader must be unlocked to be able to do more with a phone, and it can cause the loss of all phone content. Backing up first could preserve the data, even if you'd have to root the phone to restore this older information again.

Simple Android Backup utilizes Python and works on both Linux and Windows. It might even work on OS X, according to a post he made on /r/Android. The source code is also provided for anyone willing to tinker with it. If SAB doesn't work, Ultimate Backup Tool might also be worth a look if your phone runs Android 4.1+.