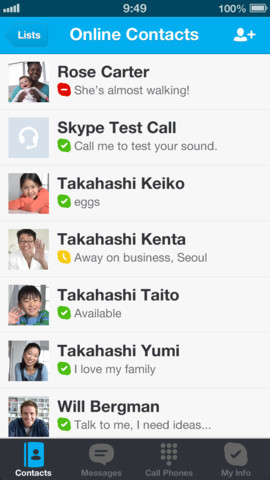 Microsoft has already announced that Windows Live Messenger will be retired in early 2013 in favor of Skype, which Microsoft acquired a year ago. Today, there's word of another minor but important development for Skype users on a non-Microsoft platform that could tie them even more into Microsoft's services.

The Skype version on iOS has been updated on iTunes today, and this new 4.2 version allows users to sign into Skype via their Microsoft account. That means iOS owners who also use services such as Hotmail, Outlook.com or the soon-to-be-dead Windows Live Messenger can use the same information to sign into Skype. The update even allows users to create a new Microsoft account from within the app.

Besides the account changes, the new 4.2 version has some new features, including a way to edit instant messages by tapping and holding them, along with being able to choose a emoticon for their IM. People who have an iOS device that has a Retina display will get the option of choosing an animated emoticon.

Finally, the new iOS version of Skype lets users edit saved phone numbers from the dial pad, along with some unnamed bug fixes.