In the US, Sprint is not necessarily known for great customer service like other carriers, such as T-Mobile may be. However, after the failed merger with T-Mobile, that may be changing. Yesterday, Sprint announced a new plan that may have users who use a high amount of data take a second look at the carrier instead of going to or sticking with a different carrier.

The new plan is called the Sprint Family Share Pack and it doubles the data currently available on similar plans. The plan will be $100 and will include 20 GB of data and unlimited talk and text. The plan supports up to 10 lines, with each line costing $15 on top of the $100 dollars. That means that four lines will cost $160. As an added bonus, customers will receive an additional two GB per line. This means that with four lines, each line could use 7 GB and not go over the total data limit.

Below is a breakdown of more options from Sprint: 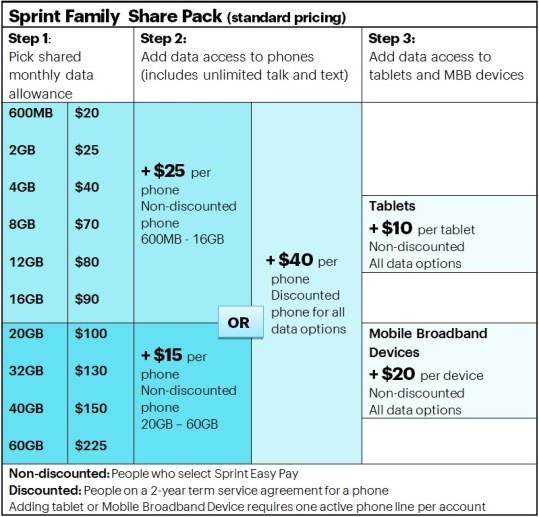 As the chart above shows, Sprint even allows tablets and mobile broadband cards and devices to be added to the plan as separate lines. For a limited time as well, Sprint has announced that it will pay the termination fees of customers switching to Sprint. Note that the offer will go quickly, as the fine print states that the offer starts August 22nd and ends September 30th; the plan itself will last through 2015.

All images courtesy of Sprint

Update: Neowin has received a statement from Sprint with an update on the Sprint Data plans. "Our new standard pricing is the shared data plan.We are currently running a promotion that will waive the access fee for all lines on a 20GB or higher plan." It appears that the chart will above will be in effect beyond September 30th.