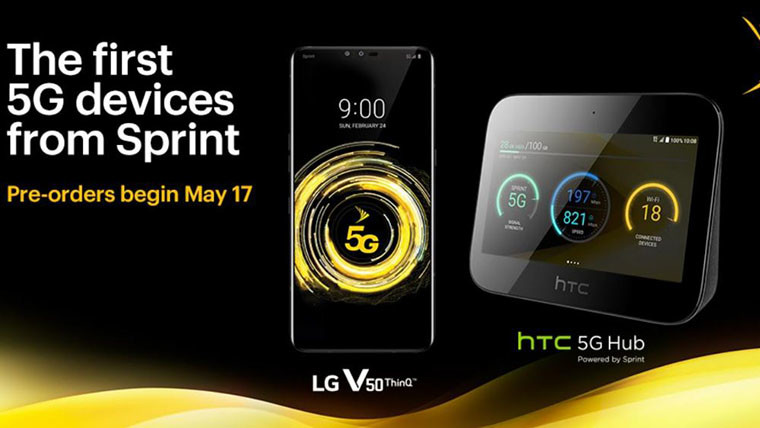 Today, Sprint announced the availability of its first 5G devices, including the LG V50 ThinQ 5G and the HTC 5G Hub. You'll be available to pre-order both beginning tomorrow, and they'll be available on May 31. Of course, you'll want to be in a 5G market, which will include Atlanta, Dallas, Houston, and Kansas City, with Chicago, Los Angeles, New York City, Phoenix, and Washington, D.C. coming over the next few weeks.

"There has never been a better time to be a Sprint customer as we bring on the next generation of wireless speed," said Michel Combes, Sprint CEO. "LG V50 ThinQ 5G and HTC 5G Hub are innovation marvels and they are ideal to be the first to bring the power of both Sprint 5G and 4G LTE Advanced to our customers. I am proud of the close collaboration with LG, Qualcomm and HTC that has brought us to this momentous milestone."

Announced at Mobile World Congress, the LG V50 ThinQ is a Sprint-exclusive, packing a Snapdragon 855 Mobile Platform, a 4,000mAh battery, and a triple-lens camera. It also offers a Dual Screen accessory, adding a 6.2-inch second screen.

HTC announced the 5G Hub around the same time, as Sprint's first 5G device. It's a mobile hotspot that offers multi-gigabit 5G speeds.