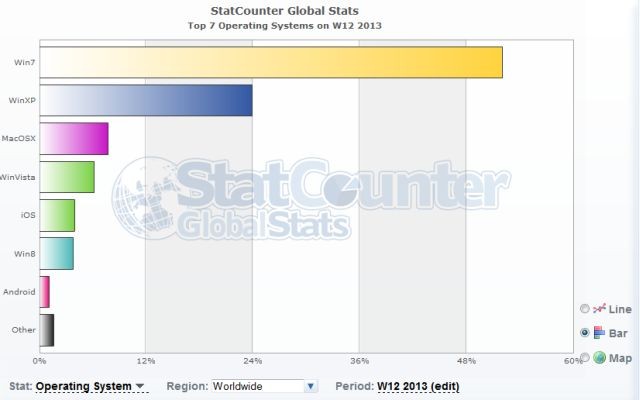 We have posted up data showing the market share of Windows 8 from Net Applications as well as from the Steam PC game download service in the past several months. However, what does StatCounter, which says it takes its information from three million websites, have to indicate about the adoption of Windows 8?

As it turns out, it seems to agree mostly with Net Application's findings, even though the two sites have some very different methods of acquiring and examining their data. The latest numbers from StatCounter show that for the week of March 17th, Windows 8 is currently installed on 3.77 percent of all PCs. That's a slight rise compared to the first week of 2013, when StatCounter showed that Windows 8 was used by 2.34 percent of all PCs.

In this week's numbers, Windows 8 is just behind Apple's iOS operating system which has 3.92 percent. Windows 7 is still the most used operating system worldwide with a whopping 52 percent, followed by Windows XP with 23.86 percent. Microsoft is set to end official support for Windows XP in just over a year from now, on April 8, 2014.

OS X is next with 7.72 percent and Windows Vista is show with 6.11 percent of the market share; Android is shown as well behind even Windows 8 at 1.07 percent.