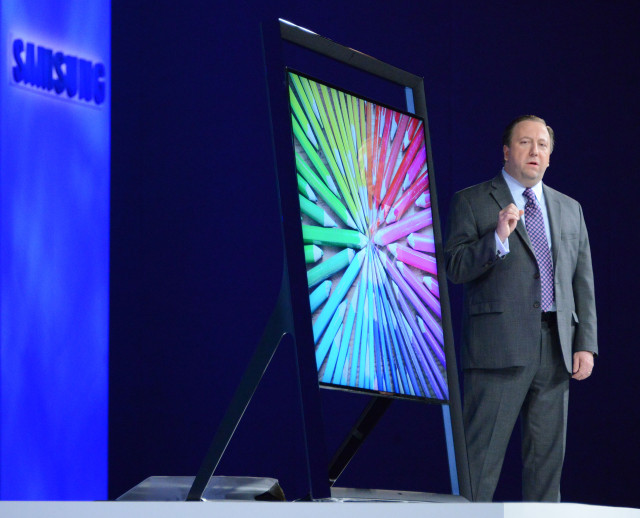 Samsung's 85" ultra high-definition TV, officially the UN85S9, is now available to preorder at a staggering $40,000.

Clocking in with 8,294,400 pixels and a 120-watt sound system built into its easel-like frame, the Korean company's monster TV was first unveiled in January at CES to high critical acclaim. Attendees noted the high contrast ratio, 'deep' blacks and 'vivacious' whites. The image processing technology inside the TV will also quadruple your existing 1080p HD content, upscaling it to the native 4K resolution - a useful feature given the sparse amount of UHD (4K) content currently available.

At $40,000, the TV will be Samsung's largest and most expensive device to ship this year and clocks in as one of the most expensive TVs to ever go on general sale. Pre-orders will begin in 'late March', with availability of the S9's bigger twin - a 110" version - so far unannounced.

As well as the announcement of the S9's pricing, Samsung's executive vice president, Joe Stinziano, outlined three new apps the company are adding to its smart TV portfolio - Fox, Spotify, and Univision. Most notably is the addition of Spotify, the premium music streaming service only currently available to PC, Mac, iOS, Android, Windows Phone and web customers. It is thus far unclear whether the app was designed by Samsung for the smart TV system, or by Spotify themselves.