CES 2013 is now in the history books and there's no shortage of news reports, commentary and video coverage of the annual trade show from the media. Today, former Microsoft Windows lead Steven Sinofsky posted up his own "snark free" impressions of CES 2013 on his recently Learning by Shipping blog.

His CES 2013 post is his longest yet and also serves as an example of a company "trip report". Sinofsky states, "From the earliest days of business travel, my managers have required a trip report in exchange for the privilege of taking a trip at company expense." He also offers some tips on how employees can write up a solid trip report for their employers.

As far as his CES 2013 thoughts, Sinofsky gives his opinions on what upward trends he saw at the show (more mobile products, better build quality) and trends that he felt were on the way down at CES this year (3D TVs, media boxes). 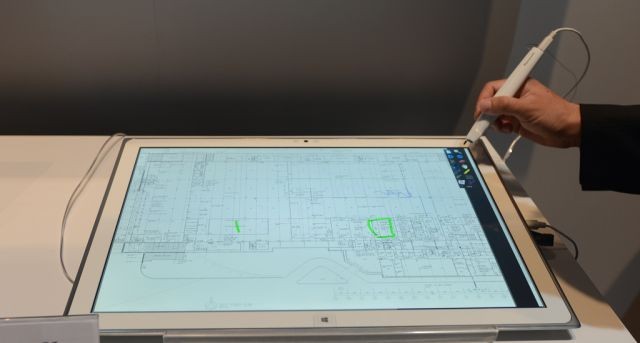 As you might expect, Sinofsky talked about the Windows 8 PCs he saw at the show and made special mention of Razer's upcoming Edge gaming PC tablet which he said had "some awesome gaming attachments".  Sinofsky also said the Panasonic 20 inch 4K resolution tablet, shown above " ... blew me away—seeing the quality of AutoCAD drawings showed a real value to the full 'stack' of hardware and software."

Sinofsky also talked about a new but still secret technology demo he got to see at CES 2013 that's being made for televisions and other unnamed devices. He stated:

It uses a single off the shelf camera (like in an iPhone) and then uses CPU/GPU to compute the tracking of your hands for gesture based UI. This is cheaper, smaller, and less complex than other solutions out there. I saw it in action and it works remarkably well—there’s almost no latency between hand movements and tracking. It works at the driver level so it can use gesture to emulate touch with existing games and software. It can be easily trained to track an object as well (like a wand, sword or saber) for games.

There's no other information about this technology other than it comes out of "university labs."