If you head on over to Microsoft's website, the Surface 2 with 64GB of storage is now out of stock. While it could be that there was a run on the devices and they sold through their inventory faster than they could make them, it seems more logical that the devices are on their way out the door. 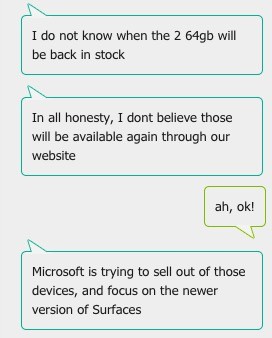 Interestingly, the sales person we talked with using the online chat function said that she did not believe that the company would be offering the model anytime soon as they are trying to clear stock and focus on the Pro 3. You can see the relevant portion of our conversation below.

The device did recently get a price cut, which could fuel the buying-spree, but this also aligns to trying to clear stock ahead of a refresh too. And considering the sales rep said she did not believe that they would be offering the device again, means that either the Surface 3 is on the horizon or this line of tablets is done for good.

Of course, if Microsoft is doing away with the Surface RT line and does not refresh the product, then they would not have an entry level device for consumers.

We have pinged Microsoft to see if they have anything to say about the devices and will update this post accordingly.

The response to Surface continues to be exciting to see, and we’re thrilled to see customers taking advantage of recent offers, such as the $100-off Surface 2 promotion. Our primary goal remains getting Surface into the hands of all people who want the most productive tablet on the planet. We recommend those eager to buy visit Microsoft Retail Stores, MicrosoftStore.com and third-party retailers for the latest availability.

A blanket statement that does not provide any content to what the sales associate said about the company trying to remove stock from inventory, permanently.