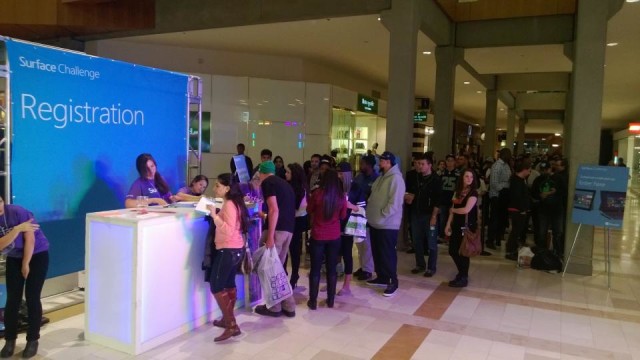 As Microsoft previously revealed, it held launch events at 10 of its Microsoft Store retail locations in the U.S. on Monday night for its new Surface 2 and Surface Pro 2 tablets. The products themselves went on sale at those stores at midnight in their respective time zones, but there are some questions as to how many people were there to actually get the tablets.

Geekwire reports that there were close to 300 people who attended the Surface launch event at the Bellevue Square Mall in Bellevue, Wash., last night, which is of course just a few miles from Microsoft's Redmond headquarters. However, as the above image shows, many of the attendees were there to sign up for the Microsoft Challenge contest, where the winner would be flown quickly to Orlando, Fla., today to attend the opening of that city's new Microsoft Store. Other people were there for Seattle Seahawks player Richard Sherman, who was at the store and signed autographs for the first 150 people in line.

CNET reports that the San Francisco Microsoft Store Surface event had only 50 people in line when the doors opened at 10 p.m. Monday, and many of the people who were interviewed had no intention of actually buying a new tablet.