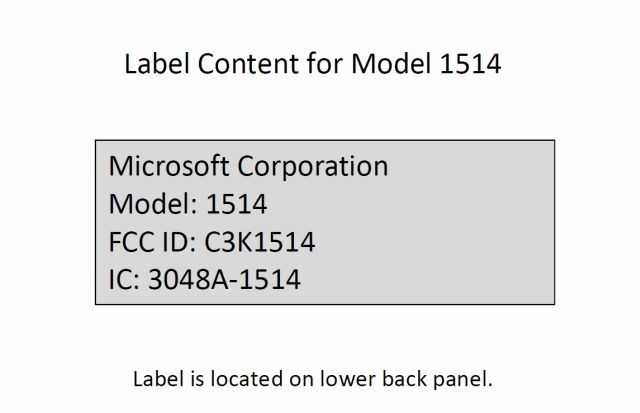 A few weeks ago, Microsoft re-confirmed that its Surface Pro tablet, running on an Intel chip and with Windows 8 Pro inside, would ship in January with the starting price of $899. Now it looks like the tablet might have quietly gone through the approval process of the US Federal Communications Commission.

A recent post on the FCC website shows the documents of the unnamed product from Microsoft. The big clue is the model number displayed on the label, which happens to be "1514". The current Windows RT version of the Surface tablet has the "1516" model number. The two numbers certainly cannot be a coincidence.

The rest of the documents only confirm that "1514" will have some kind of 802.11n WiFi and Bluetooth wireless support. However, this FCC note would seem to be a good sign that Microsoft will keep its current schedule of releasing the Surface Pro next month.

As we have already reported, the $899 Surface Pro will have a 64 GB hard drive, with a 128 GB version priced at $999. Both prices do not include the optional Touch or Type Covers, but they do include a Surface digital pen with "expanded capacitive and digitizing technology."