‘Unlimited’ is one of those words that seems to be wildly misinterpreted when it comes to the telecommunications industry. Whether it’s the ISP who says you have ‘unlimited’ downloads, but then reduces your speed above a certain amount, or the mobile operator that cheerfully sells you an ‘unlimited’ data plan with your new handset with a tiny fair usage policy attached, the reality of ‘unlimited’ tends to be… well, somewhat limited.

So when T-Mobile UK announced its new ‘Full Monty’ price plans, promising unlimited voice calls, text messages and data usage, we naturally expected there to be some discretionary limit, some cut-off point, some restriction on how or when you could use the minutes, texts and megabytes… but no, there appears to be no catch, no limit, nothing waiting to ruin your fun.

There are actually four Full Monty price plans in total. These are priced between £36 and £61 per month ($57-$96 USD / €43-€73 EUR); all four offer unlimited calls to other mobile networks (except for the £36pm plan, which limits this to 2000 minutes), unlimited calls to T-Mobile phones, unlimited text messages to all networks, and unlimited data. 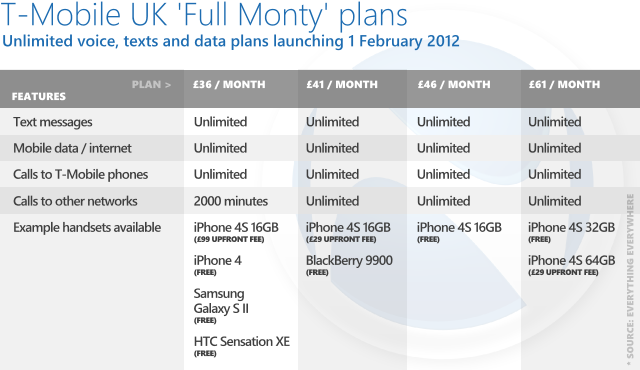 The plans don’t really differ on features, as you can see from the chart above, and all of them are 24-month contracts. The difference in pricing therefore comes down to which handset you’d like, and whether you want to pay for it upfront, or over a longer period through a more expensive monthly plan.

T-Mobile is going out of its way to emphasise the absence of any limits on this offering, which makes it a truly unique proposition in the UK marketplace. Currently, the Three and giffgaff networks both offer genuinely unlimited data for smartphones in the UK, but no operator currently provides a completely limitless experience, which is precisely what T-Mobile claims to be offering here.

There are no limits at all to how much data you can consume; there is no fair usage policy, no throttling, no restrictions – so you can stream or download music and video to your heart’s content. You can even tether your phone to other devices to allow them to use your phone’s unlimited data too, at no extra charge.

The company is unequivocal in this. Speaking with Pocket-lint, T-Mobile’s Ben Fritsch made sure he was absolutely clear when asked about the unlimited nature of the new plans: “There’s no fair usage cap – and you can use it for tethering as well.”

Image via Everything Everywhere


The demand for data

T-Mobile is certainly swimming against the flow with its new plans. The trend across the industry over the last couple of years has been to downplay the idea of ‘unlimited’, both in response to consumer frustration at the restrictions attached to so-called limitless plans, but also as service providers face the reality that the demand for data is soaring, as buyers increasingly flock to data-hungry smartphones and tablets.

The UK’s giffgaff network – part of Telefónica O2 – has experienced challenges in marketing a truly unlimited service; as The Next Web reports, the company recently revealed that 1% of users accounted for more than a third of data traffic across the entire network. Surely T-Mobile will face the same challenges in managing consumption of data? The company hopes to mitigate some of these issues through a partnership with BT Openzone, ensuring that all those on Full Monty price plans will get free and unlimited access to BT’s wi-fi hotspots across the UK. A new “T-Mobile Wi-Fi App” will help customers find BT and T-Mobile hotspots on the move, and will allow handsets to automatically join a supported wi-fi network if one is in range.

But even without this, Everything Everywhere – the company that jointly owns T-Mobile UK and Orange UK – has the country’s largest 3G network, and believes that its recent investments in network infrastructure will ensure that it can support any increase in data consumption.

But despite being under the same corporate umbrella, Orange UK customers shouldn’t necessarily expect a similar all-you-can-eat buffet being offered on their network too. Everything Everywhere’s then-CEO explained in 2010 that the two brands would become more differentiated, with T-Mobile focusing on its “straightforward value-orientated appeal”, and Orange retaining the “premium element” of its brand positioning.


What about T-Mobile US?

The Full Monty plans are a clear response to T-Mobile's competitors in the UK, and with mobile operators in the US rapidly backing away from the idea of 'unlimited' in favour of selling data bundles and packages at a fixed rate, it's fair to say that T-Mobile US doesn't have the same competitive influence that has encouraged Everything Everywhere to launch its new unlimited plans in the UK.

That said, Deutsche Telekom - which owns half of Everything Everywhere - might want to consider something as drastic as the Full Monty plans in the US. The company put an awful lot of eggs into the AT&T merger basket, and although it got a substantial settlement agreement when the deal collapsed, it still faces a patchy network that's in need of upgrade and expansion, an absence of killer devices (which have been hoovered up by its larger rivals), and still no iPhone. Given the extraordinary statistic that 80% of all smartphone sales at AT&T were iPhones last quarter, that's clearly a big gap in their offering.

A truly unlimited deal might just be the kind of differentiator that T-Mo US needs to make it relevant to buyers again, but there remains the question of whether its HSPA+ network could cope with the massive increase in demand. For now, though, don't expect anything, and you won't be disappointed.

As far as T-Mobile's European operations go, it will largely come down to the competitive landscape in each market; each country in which T-Mo operates in Europe is largely autonomous when it comes to setting price plans and stocking particular devices. If there's no competitive imperative to rock the boat with groundbreaking new price plans in Poland or Slovakia, then it's unlikely that T-Mobile will want to shake things up with new flat-rate all-you-can-eat tariffs, which may limit potential revenues prematurely.

T-Mobile's Netherlands operation actually experienced major 3G network congestion as a result of increased smartphone data usage, as recently as 2010. Ars Technica reported at the time that T-Mobile Netherlands was forced into issuing costly refunds to customers for months of data usage.