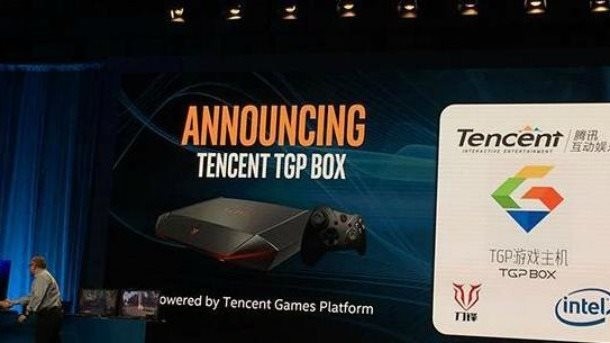 Following rumours that an upgraded PlayStation 4 is on the way, a new games console is coming into the horizon. Riot Games, under the arm of Tencent, along with Intel and Haier, have announced the Tencent TGP BOX, which will be released as the Blade BOX, a games console designed to change traditional gaming.

In the way of specifications, all we know so far is that it will use Windows 10 as its operating system, with the Tencent Games Platform being the overlay that users will make use of. It will also come with sixth-generation Intel processors, namely the i3, i5 and i7.

You can see the look of the console and its controller above; it is distinctly different to the type of console design that we've become accustomed too, with it featuring more curved edges and a different front layout to the back. The controller is reminiscent of the Xbox One controller.

Features of the console are different to what you'd expect, too. But that's intentional. This isn't designed to be the traditional console you're used too, rather it is designed to change the traditional console, with smart features being built-in to the console, provided by Intel smart sensing and smart home technology. From what we know, here's what you can expect:

The TGP Box mode switches you between the gaming mode or Windows 10, ultimately allowing you to run the two asynchronously. Tencent is a major game developer and operator in the Asian markets, as well as internationally. As such, we can confirm that the console can run games such as:

More games are expected later this year from third-party publishers and developers.

At this time it is unknown if the console will arrive in Western markets, as Tencent is a major player in the Asian market, although that market is mostly untapped in terms of gaming. A market of particular interest to this console is China, which lifted its ban on console gaming and reduced restrictions last year.