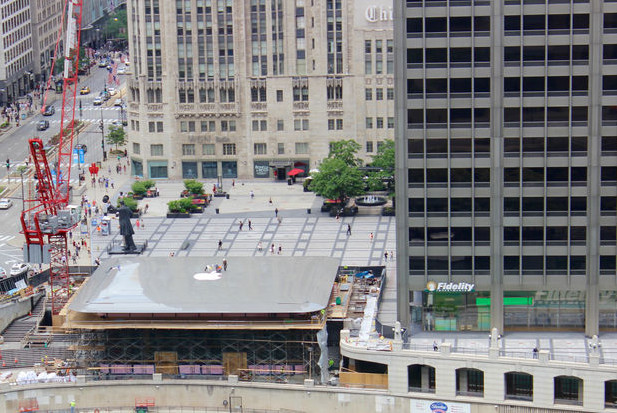 While there are many retail chains that open doors to new stores year round, few do it at the level of Apple. The firm has been known to spend quite a bit of time, money, and energy on building its larger stores, making them seem more like architectural masterpieces than shopping destinations. While the construction at the new Chicago location has been going on for some time, it appears that a new addition has transformed the building into a giant MacBook.

According to David Matthews from DNAInfo, just for a short while, the Apple store looked like one of the firm's own products. While the construction crew did roll out a huge Apple logo on the roof of the building that transformed it into a MacBook, it was only momentary, as it was then removed in less than an hour.

While the original plans do not have an Apple logo on the roof, there could be changes on the way. Naturally, it could also just be the crew having a bit of fun, creating a unique photo opportunity. Although the Apple logo would be interesting to see, it does seem a bit ostentatious, even for Apple.