Three days ago, the owner of FunnyJunk.com, a site that aggregates humourous content, went after the artist behind the web comic The Oatmeal with a lawsuit. The lawsuit accuses The Oatmeal's owner, Matthew Inman, of continuing to keep "false accusations of willful copyright infringement" that "grossly misrepresents the current state of affairs."

The online war of words began last year, when Inman accused FunnyJunk of copying comics from his site, and other prominent web comics such as Cyanide and Happiness, XKCD, and Perry Bible Fellowship without proper attribution to the creators. FunnyJunk did respond, albeit sending a wave of immature Facebook fans against Inman in retaliation.

FunnyJunk's lawyer also accused Inman of manipulating Google search results to point to The Oatmeal whenever the term "funnyjunk" is entered as a query, and expressing malicious intent through a quirky HTML comment in the source code.

Since then, the owner of FunnyJunk quietly deleted unsourced comics from The Oatmeal as Inman pointed out on his site. In addition, Inman refused to send over $20,000 in damages to FunnyJunk's lawyer by June 12.

Instead, Inman countered with... this. The below image is, in Inman's words, a "drawing of his [FunnyJunk's owner's] mother seducing a Kodiak bear." 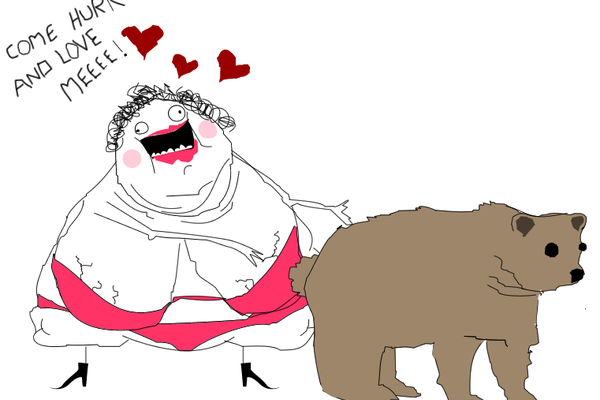 The bear is of significant context, as Inman's response to the lawsuit was to ask for $20,000 in donations split 50-50 between the National Wildlife Foundation and the American Cancer Society. Oh, and a photo of said money to go along with the drawing to the owner of FunnyJunk.

That milestone was reached in an hour, and now with 11 days left, the donation drive has hit $166,515. Inman plans to add two more charities to receive the funds.

One might think that while the donations to charitable organizations is an awesome move, Inman should keep his lawyer on speed dial, just in case FunnyJunk goes ahead with the lawsuit - and if they tack on an additional $10,000 in damages for defaming his mother. Hopefully not.

Thanks to em_te and Zappa859 for the tips in the forums!