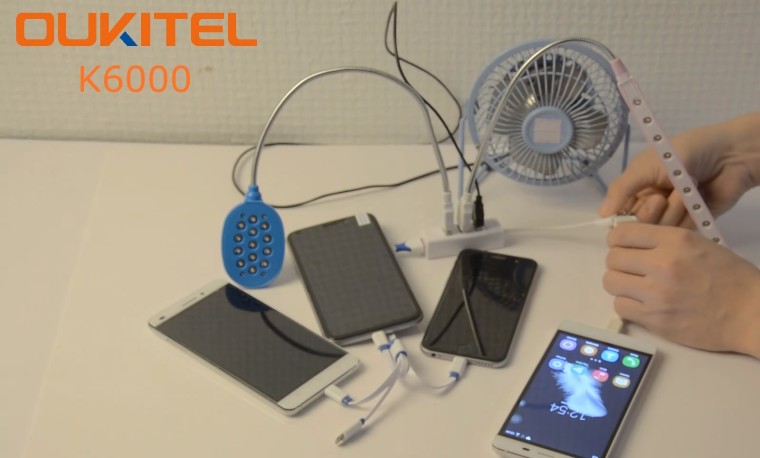 In what appears to be the video of the day, Chinese smartphone manufacturer Oukitel has posted an almost five-minute long video of one of their smartphones doing everything from charging a handful of other smartphones simultaneously, through to powering a series of USB LED lights and fans. The smartphone in question is the Oukitel K6000, which follows the same naming convention as the K10000 in that the name refers to the battery capacity -- in this case it's 6000 mAh.

The video begins with a set of hands showing the USB OTG plug and then going through and showing each individual phone, which includes an Oukitel K4000, a Samsung Note 4, an iPhone 6 and an iPhone 6 Plus. Each phone is then individually plugged in and it's shown that each phone is in fact charging.

It continues on from the quad-phone scene to just the K6000 and an iPad, and the iPad is then charged. The video moves on to showing a series of LED lights and a USB fan running off the USB OTG, and finally shows all four phones mentioned earlier - as well as the USB lights and fan - plugged into an unpowered USB hub that is connected to the K6000 with all of it running simultaneously, all off the K6000.

It's mentioned in the video that the phone is capable of 5V/1A output, or five watts in total, so don't expect the fastest charge times if you plan on charging four phones at once. And if you do plan on charging your phone, it's probably not in your best interests to run a series of LED lights from it at the same time.

The video starts has fairly loud music playing throughout, so it's worth turning down your volume if you're not the biggest fan of house music, T-Pain or Flo Rida.