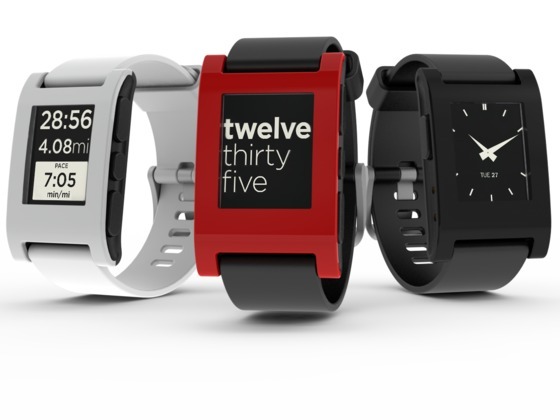 The Pebble smartwatch was one of the highlights of CES 2013, launching to almost unanimous praise. Originally Pebble was a Kickstarter project promising to design an awesome watch that could seamlessly connect to smartphones and deliver important information, like text messages, right to your wrist.

The project was aiming for $100.000 in funding but it quickly blasted past that and with almost 70.000 backers ended up raising over $10 million, shattering previous Kickstarter records as well as the creators’ expectations.

The Pebble smartwatch weighs in at only 38g, has an accelerometer, an E-paper display, and connects wirelessly via Bluetooth 4.0 with any iOS and Android device. It is also waterproof. Users can get notifications for text messages, e-mail, missed calls and a few other functions and you can also use it to control the music player on your device.

Right now the watch has launched with a limited number of features but in the near future its capabilities will greatly expand. Eric Migicovsky, Pebble’s founder and primary engineer, said new watch faces will be coming really soon but he also explained that a “Sign in with Pebble” API will be released later on, which will allow users to receive notifications from a lot more services.

The Pebble watch will start shipping on January 23rd, after a 4 month delay due to overwhelming demand. According to Migicovsky they have over 100.000 backorders right now so it might be a few weeks before everybody gets one. If you haven’t backed the project up on Kickstarter, you can still buy the watch here for $150, but as we said, they’ll be out of stock for some time.

So what do you folks think, is this watch great for you or are you waiting for version 2.0? Let us know in the comments below.

Source: The Guardian | Image via Kickstarter