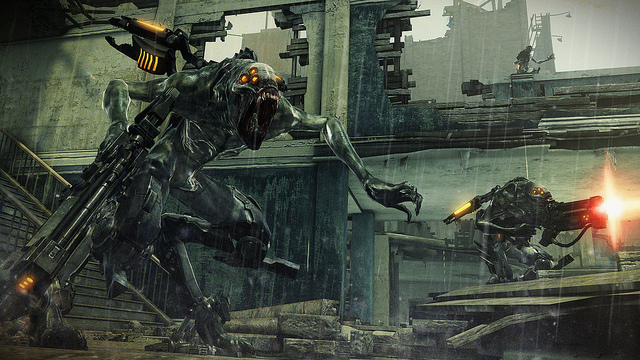 We are definitely out of the summer drought of new game releases. The next seven days gives console and PC gamers a cornucopia of new titles to check out, set in a variety of genres. The highest profile title out this week is Resistance 3. This Playstation 3 exclusive from developer Insomniac Games concludes the alternate history first person shooter trilogy. The player once again fights the alien Chimera race who have now fully invaded the US in this timeline's version of the 1950s.

Also due out this week is Warhammer 40,000 Space Marine. The third person action game from developer Relic and publisher THQ brings the sci-fi table top war game franchise to the PC, Xbox 360 and PS3 platforms with lots of shooting and melee fighting. If you think there can never be too many zombie games, then Dead Island might be your cup of tea. This first person action game takes place on an island resort in the middle of a zombie apocalypse. The game, from developer Techland and publisher Deep Silver, is due out for the PC, Xbox 360 and PS3 this week.

Ubisoft brings back the Driver action-driving franchise this week with Driver: San Francisco. The game, for the Xbox 360 and PS3 consoles (a PC version is due out later this month) has the player controlling a character who is actually in a coma dream, thinking he is driving and having adventures in San Francisco. The Xbox 360 console gets a Kinect exclusive game this week with Sega's Rise of Nightmares. This "M" rated first person survival horror game has the player using the Kinect motion controller camera to use the game's melee weapons in order to fight off its various monsters.

Downloadable games due out this week include Crimson Alliance, a fantasy action-RPG from developer Certain Affinity that's a Xbox 360 exclusive. Bloodrayne Betrayal, which brings back the vampire action game franchise after many years as a 2D side scroller, is also due for a downloadable release this week for the Xbox 360 and PS3. 1C Company will release Men of War: Vietnam, the latest game in the military RTS series, this week for the PC via download. Also, the PC version of ACE Team's Rock of Ages is due out this week from download sites.