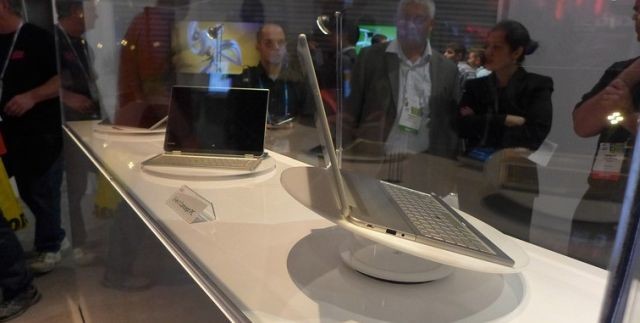 Toshiba has already shown off two upcoming Windows 8.1 notebooks with 4K displays at CES 2014, but the company is also displaying a concept for a future PC that is already looking very different than the standard laptop.

Slashgear reports that this "5-in-1" concept PC was shown under glass at Toshiba's CES booth. It has been designed to be used like a regular notebook with a keyboard and the screen can detach to serve as a stand alone tablet. The screen can also stay connected to the keyboard dock and flip 360 degrees, much like Lenovo's Yoga line.

The fourth mode is Canvas, where the keyboard base can flip 270 degrees. This allows for the display to be placed in a position for the use of a digital pen, so users have the best angle for creating digital artwork and graphic design. The fifth and final mode is Presentation/TV. This allows the base of the PC to rotate and detach from the keyboard, so that the display can be placed in an position to watch video without the need of a dock.

Since this was a concept design, Toshiba didn't have any information on what kind of hardware specs would be included inside. However, we would suspect that the company will launch a real product using this design in the near future.