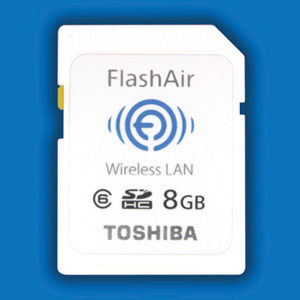 SD storage cards have been released with WiFi support inside for a while now. These cards, such as the popular Eye-Fi products, are mainly used by cameras in order to transmit pictures and video from the camera directly to a PC or perhaps a online service like Facebook or YouTube. A few days ago Toshiba officially announced plans to take this kind of a concept one step further. Its press release revealed the FlashAir, an 8 GB SDHC memory card that allows for two way wireless connections.

The FlashAir's capabilities mean that when it is installed into any SD card slot it will allow the equipped device to not just upload images, video and data but also for the device to receive that kind of content from smartphones, PCs and cameras that have the FlashAir card installed.

Toshiba claims another feature of the FlashAir is that it is supposed to have a lower amount of power use than other WiFi enabled SD cards. That should allow any devices with the FlashAir to have a longer battery life. At the moment Toshiba is planning to release the FlashAir in February 2012 in Japan and in March 2012 in Europe. Pricing has yet to be finalized although Engadget believes it will have a $90 price point. We do wish there were more than just 8 GB on the card but you can't have everything. Hopefully the company will release more FlashAir cards in the future that will have some additional storage space.