Piracy is always a problem for content creators around the world, with many people feeling that the right way to get content is the free (and also illegal) way. Companies have tried to stop pirates through a number of methods, including Digital Rights Management (DRM) and massive lawsuits but also through offering bonuses to legitimate customers.

This Trivia Tuesday I tried to find as many facts as I could on piracy; check them out below.

Definition of piracy: the unauthorized use or reproduction of another’s work (from the Oxford Dictionary).

The United States of America has the lowest rate of piracy of any country in the world, with just 20% of all installed software having been pirated. The estimated commercial value of this software is $9.5 billion.

$58.8 billion is the estimated commercial value of all pirated software worldwide. The United States alone makes up 16% of this figure. 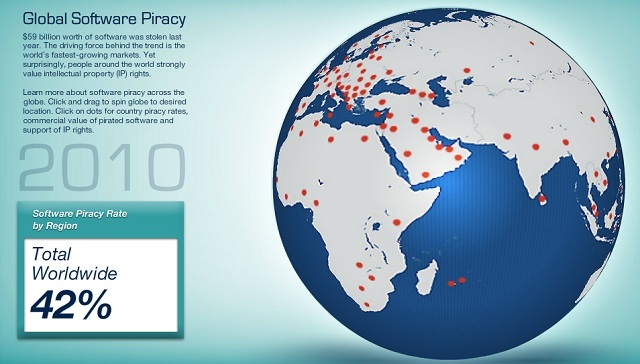 The previous three statistics come from the BSA/IDC 2010 Global Software Piracy Study. It is unclear exactly how accurate the testing methods are for this study, but it is one of the few global studies that attempt to measure the effects of piracy.

Did you know that Windows XP, on average, had more illegal downloads at any given time than Windows 7 in 2011? This is according to this interesting infographic, which also claims that both Mac OS X Lion and Snow Leopard were being pirated more at any given time.

Adobe Photoshop is one of the most pirated pieces of software worldwide. The potential revenue loss for Adobe in one day due to Photoshop piracy is estimated at $18.7 million as each copy is worth $999.

4 million torrents were hosted on The Pirate Bay before they switched to serving just Magnet links on February 29, 2012. If each torrent file was approximately 20 kB, by switching to Magnet links they would have saved around 80 GB of space.

99% of torrents contain illegal material. This is based on three sources: a University of Ballarat study that concluded 0.3% of BitTorrent files are confirmed to be legal; a Princeton study concluded that 99% of torrents are illegal; and my own (rough) research that placed 16,800 legal torrents against 11.70 million in total to give a figure of 99.86% illegal.

13,948.88 TB is the total amount of content available through isoHunt’s indexed torrents. If 99% of this is illegal then they index 13.8 PB of copyright infringing material.

Did you know that in May 2011, 24,583 people were targeted in a lawsuit for downloading The Hurt Locker via BitTorrent? Later this case was completely dismissed because the plaintiff could not collect enough evidence in time to properly bring all the people to court.

Ubisoft’s game DRM is perhaps one of the most controversial methods to stop piracy. It requires PC gamers to be constantly connected to Ubisoft’s servers to progress in the games, and was seen originally in Assassin’s Creed II. While it was originally successful, it was “cracked” by PC release group Skidrow several weeks after release.