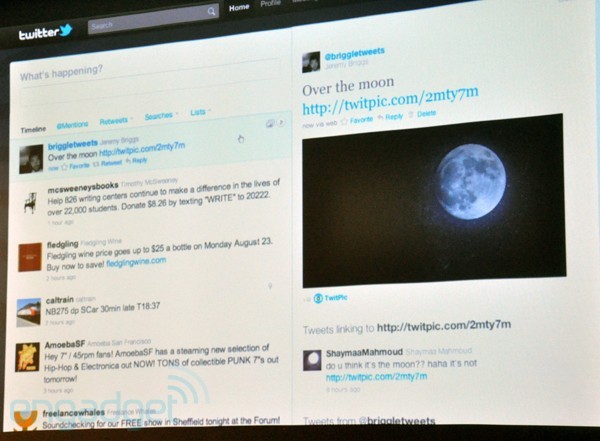 Today at Twitter's official headquarters, the company best known for revolutionizing social networking has hatched something new. Expected to roll out over the next few weeks, according to TechCrunch, will be a completely redesigned and revamped Twitter.com. Borrowing ideas from their official iPad app, Twitter will still have two columns, except one will be for the actual stream of tweets, while the other provides other content, such as embedded pictures, videos, and streams.

According to Engadget, sixteen media providers have jumped onto the Twitter bandwagon in order to seamlessly merge their content into the world's Twitter streams. These companies include "YouTube, Vimeo, Ustream, and all popular picture services."

Those attending the Twitter announcement will be getting their accounts updated today. The roll out to the rest of Twitter's 160 million users will happen incrementally. However, Twitter states that they're not standing firm on the "few weeks" timeframe, as mentioned above. It was noted that the new website is a complete re-design and has been rebuilt from the ground up in order to make things more responsive and feature rich. Twitter's goal is to remove friction and to allow its users to get the most out of their service, in the least amount of time. No new Twitter apps for mobile devices were announced to go with the new site.