Twitter released its first Twitter Transparency Report on Monday. The report's close proximity to Independence Day in the United States is no coincidence, as Twitter cited the necessary reminder that governments should be held accountable, "especially on behalf of those who may not have a chance to do so themselves."

The transparency report, announced on Twitter's official blog, was inspired by those published by Google, and Twitter's version focuses on three categories of requests: government requests for information on users, government requests to withhold content, and DMCA takedown notices from copyright holders.

While Twitter explicitly stated that the data in the report is not 100% accurate, the data sheds revealing light on the global trends for removal and information requests. The company received more government requests from January 1, 2012 through June 30, 2012 (the span of this first report) than in the entirety of 2011. According to the report data, Twitter did not comply with any removal requests from governments. However, 63% of user information requests from governments were complied with, with the United States leading the number of requests at 679.

Another observation is that, at least for now, copyright takedown notices far exceed user information requests and content removal requests from government entities.

Twitter's transparency reports will be updated twice per year. 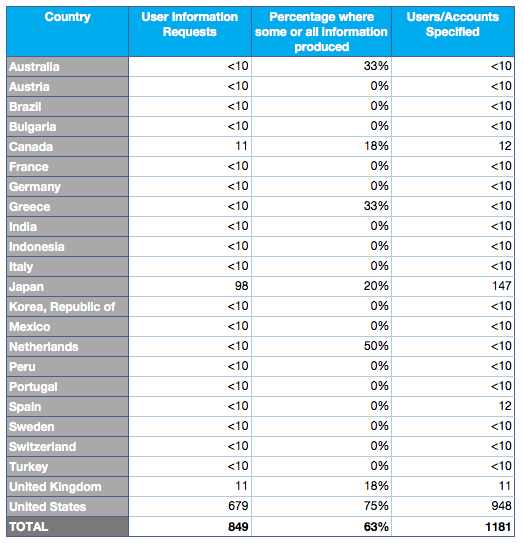