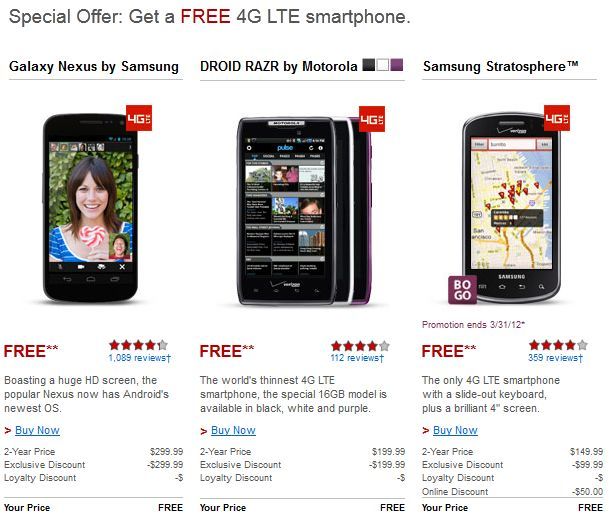 Would you like to get a $299 smartphone for free, with Android 4.0 already installed? That's is exactly what Verizon Wireless is offering its loyal customers as part of a deal to lock them into a new two year contract. The offer includes the Samsung Galaxy Nexus, which Verizon launched back in December in the US.

Verizon's web offer, first spotted on Droid Life, was sent out to a number of Verizon customers over the weekend. Besides the new two year contract, the only other catch seems to be that the customer must not have already upgraded his phone in the past 180 days.

The other free phones that are part of this offer include the Motorola Droid RAZR and the Samsung Stratosphere. Normally, a Verizon Wireless customers only gets a $50 discount towards a new smartphone when his or her two year contract is up for renewal.

If you are a Verizon customer and have an older phone that is still awaiting an upgrade, you might want to go to your local Verizon store or call online to see if you might be eligible to get this deal. Having an Android 4.0 smartphone like the Galaxy Nexus would be nice for the next two years.