A few days ago, Vertu finally announced its first new smartphone since its divestment from Nokia. True to form, the new Vertu Ti is a fairly monstrous creation, with an equally frightening price tag – even in its most basic form, you’ll have to hand over at least $10,000 to get your greasy paws on one.

The appeal, such as it is, of Vertu handsets comes from the premium materials used in their creation; indeed, each one is painstakingly hand-built in the UK, with a sheet of sapphire crystal protecting the display, and a titanium case. Despite such high-end craftsmanship, the technical specs of the device are mediocre at best: a dual-core 1.7GHz Snapdragon S4 processor, 1GB of RAM, a 3.7-inch WVGA (800x480px) display and Android 4.0.

Android 4.0 – or Ice Cream Sandwich, if you prefer its more delicious nomenclature – is now well over a year old, having been publicly released in October 2011, and since superseded by Jelly Bean variants (version 4.1 onwards). Hardly fitting for a premium smartphone, one might think. But things could have turned out differently. 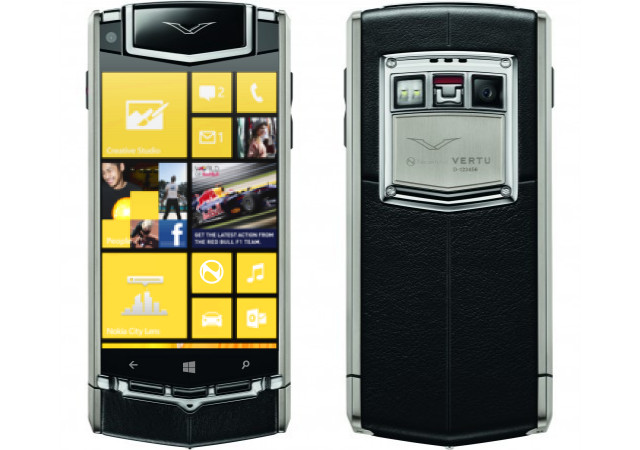 While Nokia adopted Windows Phone as its smartphone platform, Vertu continued to develop handsets under Nokia that ran Symbian. When it emerged that Vertu was to be divested, there was much speculation that it would nonetheless follow in the footsteps of its former parent; indeed, we reported last year on images claiming to show a Vertu Windows Phone 8 handset in development.

It wasn’t entirely clear how reliable those images were, until now – ZDNet spoke to Hutch Hutchinson, Vertu’s head of concept and design, who confirmed that the company had indeed been working on a Windows Phone 8 handset.

So if, as the earlier images appear to show, Vertu got to the stage of creating working prototypes with Windows Phone 8, why did the company eventually decide to ditch Microsoft’s smartphone OS? According to ZDNet, it came down to “the complexity of building for Windows Phone”. No further detail is given to explain how, in practical terms, Android 4.0 was deemed less complex than Windows Phone 8 as a basis for what eventually became the Vertu Ti, or the criteria against which the company made that assessment.

Don't hold your breath for a change of heart any time soon; the company is sticking with Android "for the foreseeable future".