This morning, pub chain J D Wetherspoon announced through its various social media accounts on Twitter, Facebook and Instagram that it would be closing them down and no longer updating customers through the platforms.

No reason was given for the move in the statement on Twitter, but the company did offer more details to various media outlets citing concerns over the recent data leaking via Facebook, and the "trolling of MPs" as root causes for the closures.

In a world of social media, J D Wetherspoon has decided to close down all Facebook, Twitter, Instagram and other social media accounts for individual pubs and head office. pic.twitter.com/16BbW7JS3g

"It’s becoming increasingly obvious that people spend too much time on Twitter, Instagram and Facebook, and struggle to control the compulsion. We will still be as vocal as ever through our Wetherspoon News magazine, as well as keeping the press updated at all times. We will also be maintaining our website and the Wetherspoon app and encourage customers to get in touch with us via our website or by speaking with the manager at their local pub."

Wetherspoon boasted more than 44,000 Twitter followers and about 100,000 followers on Facebook. Its most popular posts have received more than 500,000 views.

The company advised customers to check in at their local pub or on the official Wetherspoon website and printed Wetherspoon News magazine for updated news and queries on forthcoming events.

Update: Wetherspoon has now deleted all tweets from its account on Twitter, but we have screen grabbed the deleted tweet so you can enjoy it below. 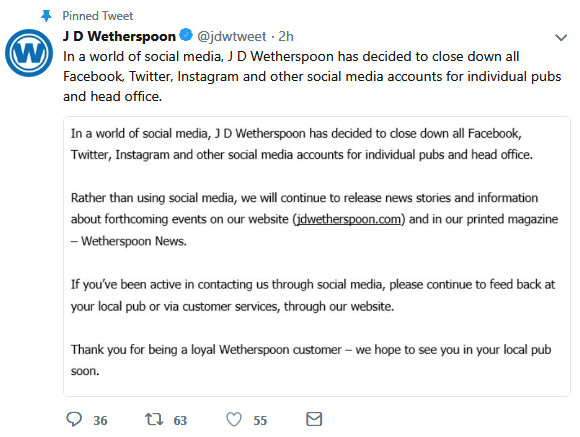