The IDC issued a report yesterday that showed Windows Phone shipments had slowed down and that the market share was shrinking. The trend seems a bit odd considering that Microsoft has been putting out quality hardware, Windows Phone has been updated at a feverish pace and well, Cortana, has been a star of her own. So, trying to find the missing link between these devices and why they are not selling, we went to the online-sites of the largest carriers in the US to see what sales representatives had to say.

We were able to talk with folks from Verizon, AT&T and Sprint; T-Mobile did not have an online chat option. We used the online chat option to talk to the representatives for easy documentation of our conversations and took the approach of being a new smartphone buyer trying to buy their first device. We tried to keep the conversation pointed towards Windows Phone devices but each carrier eventually turned us away from the products. In some cases, it was not because Windows Phone was bad, it was that the rep owned a certain type of device and pushed that phone into the conversation.

First up is Verizon who also had the most aggressive point of view about not wanting us to select a Windows Phone. You can read the chat log below. 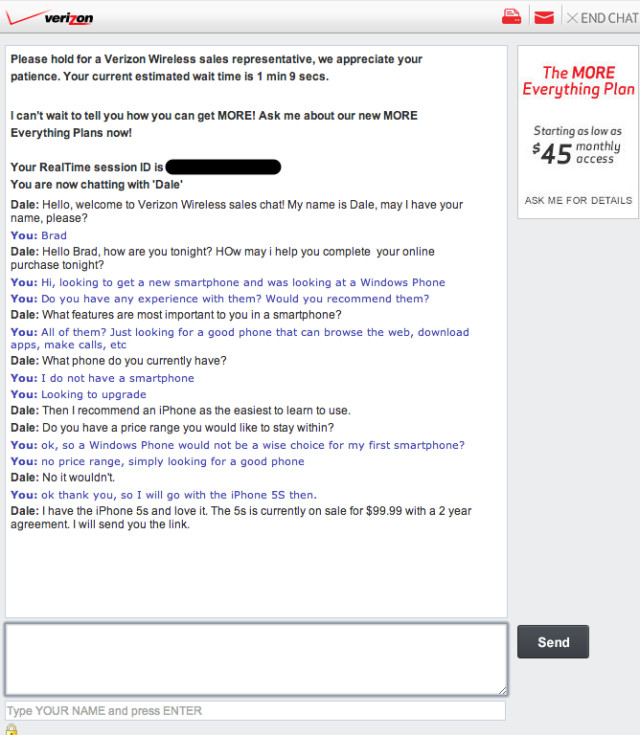 Verizon was the worst offender during our conversation with sales reps by flat out saying that a Windows Phone would not make for a good first smartphone. The sales rep directed us to an iPhone because that is what they use and can recommend it confidently. There is nothing wrong with offering a phone that the sales rep knows the user will likely enjoy but for Windows Phone, this is a huge issue as it shows that even when a consumer is interested in a device, the largest barrier they have is the sales rep.

We want to point out that this was our second conversation we had with Verizon; during the first one, we said that we had an Android device and wanted to upgrade and were considering a Windows Phone. The rep recommended we stay with Android so all the apps would transfer over to the new device. It was then decided to take the approach of being a first time smartphone buyer so that app transfers would not be used to recommend a new device.

AT&T was not much better than Verizon, as evidenced below: 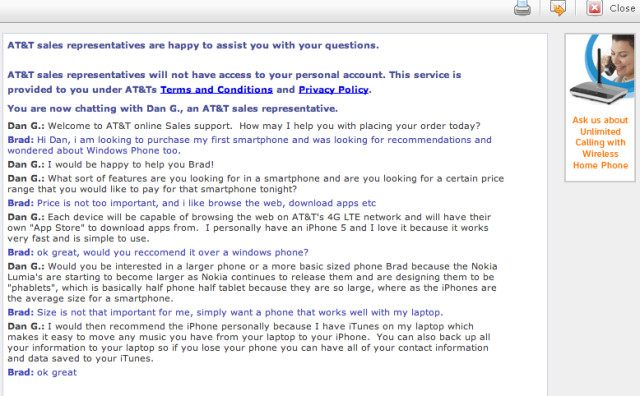 This conversation was a tad better, with the sales rep at least talking about Nokia's devices but does so in a way that paints a derogatory image of the devices and then ends by recommending an iPhone. It's not hard to see that if you want a Windows Phone, the biggest barrier is not trying to find a quality device, it's getting past the sales rep who prefers to recommend devices other than Windows Phones.

Sprint was a similar story to AT&T and Verizon but it is worth pointing out that Sprint has a dismal selection of Windows Phones with the only decent option being the aged HTC 8XT or Samsung ATIV S Neo.

As you can see from the conversations, it does not matter what features Windows Phones have as the sales rep is turning away customers from Microsoft's platform even when they have intentions of wanting a device that runs Windows Phone. For Microsoft, this is their biggest problem. It's not the apps, the hardware or anything else, it is the sales reps who are doing the most harm to the platform. This is a problem that they need to find a solution for as soon as possible because it does not matter how good their marketing is, they are still losing sales at the point-of-sale. If this isn't fixed soon, Windows Phone market share will continue to shrink.

If you have purchased a Windows Phone from a retail outlet recently, let us know about your buying experience in the comments below.