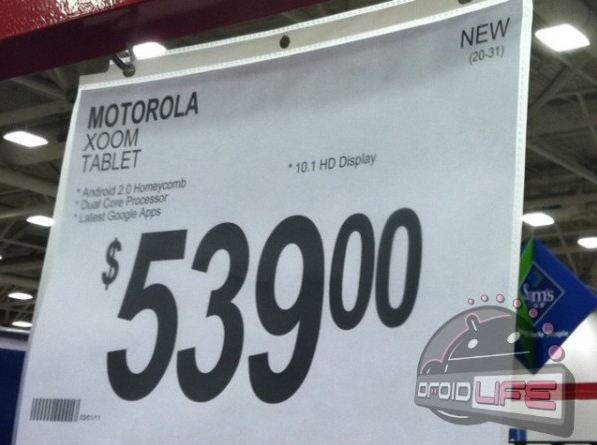 The hotly anticipated Xoom hasn’t been out very long, has been receiving good reviews, and according to Motorola’s CEO Sanjay Jha, has been “off to a good start.” However many people have been holding out on purchasing the new Android Honeycomb tablet due to the high cost and the required data plan, instead waiting for a WiFi only version. According to a rumor at Droid Life, the wait may be soon be over: The WiFi Xoom is expected to be listed in Staples’ April 3 advertisement, with employee training on the device slated for March 23.

The site also reported late last week that Sam’s Club is rumored to be selling the WiFi Xoom for $539, including pictures of an end-cap full of the sleek tablets. It’s reasonable to assume that Staples would be selling the device for roughly the same price, although a price of $599 has been thrown around for awhile as well.

Over in the UK the WiFi Xoom will be available at PC World for £499.99. The site lists the release date as “1st week of April,” which cooresponds to the Staples’ rumor.

Is this rumored price more in line with what you were expecting the tablet to cost? Or are you still holding out for a lower price point?