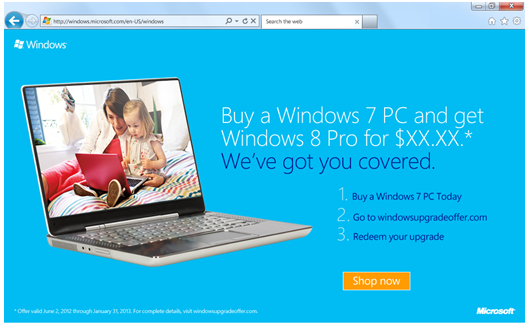 It's not exactly a shock to learn that Microsoft is preparing a way for people who will buy a new Windows 7 desktop or laptop in the near future to upgrade to the upcoming Windows 8. Microsoft has made similar upgrade paths available to consumers whenever a new version of Windows was close to launching.

News.com reports that, according to their sources, consumers who buy a Windows 7 PC running Home Basic or higher will be able to get an upgrade to Windows 8 Pro when it is launched later this year. The story claims that the program will begin either on or around June 2nd.

The update to Windows 8 Pro won't be free; Microsoft will charge users some kind of fee for the upgrade from Windows 7, according to the story. So far, there's no word on what that upgrade fee might be. The Windows 8 Pro update program is reportedly to last until sometime in January 2013.

The story adds that Microsoft wants to launch the program during the summer so that PC makers can benefit from sales for the back-to-school time period, even though Windows 8 itself is not expected to launch until after the fall school sessions begin. Microsoft has not officially commented on its Windows 8 upgrade plans.