As we reported on Thursday, Microsoft posted up a huge update to its official Windows 8 developer blog. In the massive 8,617 word post, Microsoft's lead on Windows 8, Steven Sinofsky, reveals a lot more about Microsoft's plans for Windows 8 for ARM-based processors and devices. Previously, Microsoft has been pretty silent about what the differences will be between Windows on ARM (or WOA as Microsoft refers to it) and the more traditional Windows 8 that will run on for x86 (Intel/AMD) processors.

There's just no way to crunch down all of what Sinofsky wrote but here are the broad highlights of his post:

Windows 8 ARM will be used just like Windows 8 x86

Sinofsky states at the beginning of the blog that users of Windows 8 on ARM-based hardware will have the same user experience as those who use Windows 8 on x86-based devices. He says:

Office 15 will be included in Windows 8 ARM devices

Microsoft Word, Excel, PowerPoint, and OneNote will all be included in some way in Windows 8 ARM devices, with Sinofsky saying that the full desktop UI will be there along with touch screen capacities.

The ARM version of Windows 8 will only be available to consumers when they purchase an ARM product with Windows 8 already installed. It will not be sold as a separate software product.

Microsoft is working with NVIDIA, Qualcomm, and Texas Instruments to help develop Windows 8 ARM and to make sure that the OS works well with any ARM hardware that has processors made by those companies.

Sinofsky states it was important for Microsoft to retain the familiar Windows desktop enviroment for the ARM version instead of ditching it for the Metro interface. He states:

To us, giving up something useful that has little cost to customers was a compromise that we didn’t want to see in the evolution of PCs.

You don't "turn off" a PC with Windows 8 ARM installed

Sinofsky states that instead of the usual hibernate and sleep modes, a PC with Windows 8 ARM will operate under Connected Standy power mode, which is something Microsoft discussed in detail an earlier Windows 8 blog post. He states:

When the screen is on, you have access to the full power and capabilities of the WOA PC. When the screen goes dark (by pressing the power button or timer), the PC enters a new, very low-power mode that enables the battery to last for weeks.

Developing Windows 8 on ARM takes a lot of work

Creating the next version of Windows to work on ARM processors is harder than it might seem at first. Each Windows 8 ARM-based hardware device will be, in some way, unique, unlike x86 based Windows PCs which all share a common standard. Sinofsky states:

Engineering for ARM starts with the work we did to architect the Windows kernel so it could boot and run on ARM. As you might imagine, this was a significant effort. Some might believe that this is work along the lines of porting or merely re-compiling the code for a new instruction set. There’s much more to the work than that when it comes to the kernel and the parts of Windows that connect with hardware. Along with the kernel work, we also had the work to develop the ARM compilers and tools (including Visual Studio), for building Windows.

Sinofsky goes into a lot of technical detail in the blog about how Windows 8 on ARM will handle the boot process, using both UEFI firmware as well as firmware-based TPM. He also goes into detail on how Windows 8 ARM hardware will load device drivers stating, " ... we had to build several new drivers for new types of low-power busses, plus device drivers that support connections to those busses."

Windows 8 ARM hardware products will support DirectX-based GPUs that will be used to help accelerate graphics in the upcoming Internet Explorer 10 web browser, along with Metro-based apps and the Windows UI

If you get a Window 8 ARM-based product you can expect additional driver support for features like printers, mobile broadband connections, GPS, Bluetooth and being able to automatically update software via Windows Update. It will also support tablet features like sensors for moving the Windows 8 display from portrait to landscape mode, among others.

The blog post also had pictures of an early build of Windows 8 ARM running on an early Windows Phone model, made by ASUS. Sinofsky says, "Early in the development of WOA, the only hardware we had were existing ARM devices such as phones (ARM tablets didn’t yet exist)." 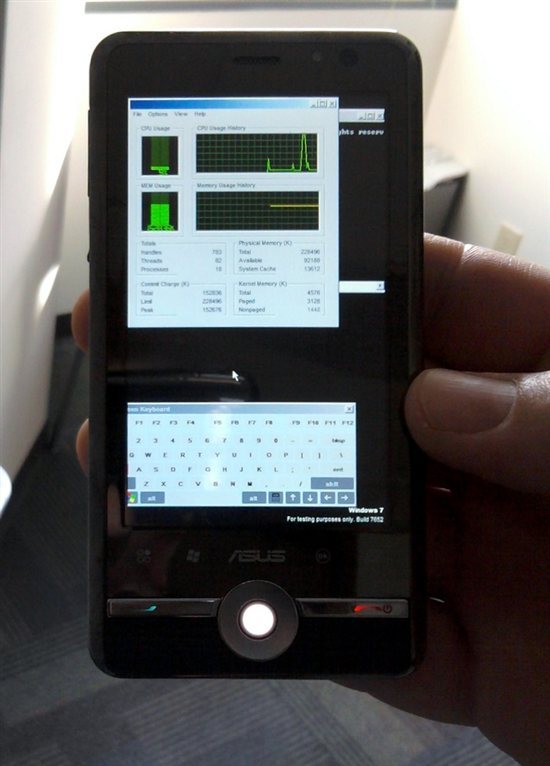 Microsoft couldn't just buy a bunch of hardware and servers to test Windows 8 on ARM like they could for the x86 version of the OS. It had to come up with something new. Sinofsky states:

We consolidated hundreds of ARM development boards along with a custom I/O board into a rack assembly connected to our testing infrastructure. Our original design focused on density supporting 300 ARM devices in one rack, but we ultimately preferred the diagnostics and availability of a custom I/O board in the 1U setup.

You can see a picture of the ARM testing rack below. Sinofsky each of their custom build racks holds 32 PCs running Windows 8 ARM and Microsoft will have 100 of these racks assembled for Windows 8 ARM testing. 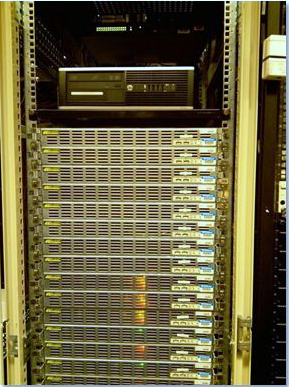 While Microsoft has been fairly clear about this point before, Sinofsky has once again confirmed that no Windows 8 ARM product will be able to run native x86 apps or allow for any emulation of those kinds of apps. If developers have already have made apps for Windows 8 X86, they will need to do some programming to make them work on Windows 8 ARM. Sinofsky states:

Many apps will be best served by building new Metro style front ends for existing data sources or applications, and communicating through a web services API. ...Other existing applications will be well served by reusing large amounts of engine or runtime code, and surrounding that with a Metro style experience.

Windows 8 ARM-based PCs will be labeled as such

Sinofsky says that when a consumer purchases a Windows 8 PC, there will be labeling that will make it clear if such a PC is based on the x86 processor or based on the ARM-themed processor.

The company plans to offer a "low volume" of Windows 8 ARM-based PCs to a certain number of developers and hardware partners for testing purposes in the near future. Sinofsky states that these PCs are designed for development and diagnostic purposes only and are not supposed to be representative of final Windows 8 ARM-based products

If you think that you have a shot at getting one of these Windows 8 ARM development PCs, you might want to think again. Sinofsky says these PC have already been claimed. He states:

We are talking about this not to tease you or to solicit nominations, but because we know word will get out and images of these will be on the web. The devices are all already spoken for and allocated. On the one hand it seems a little cruel to dangle this in front of you, but on the other hand it is worth considering that this level of transparency is a hallmark of how we develop Windows.