Windows 10 is likely to cross over to "Insider Preview" branding from today for all those enrolled in the Windows Insider Program. This can be backed up by the "accidental" leak of almost all language variants of build 10074 yesterday, directly from Microsoft's servers, which are branded as such.

Now, famed Windows leaker WZor has tweeted that all Insiders will be upgraded to the RTM version, regardless of the base install. It's well known that many Insiders have clean installed Windows 10, therefore not coming off a valid license for the upgrade path of Windows 7 and up. 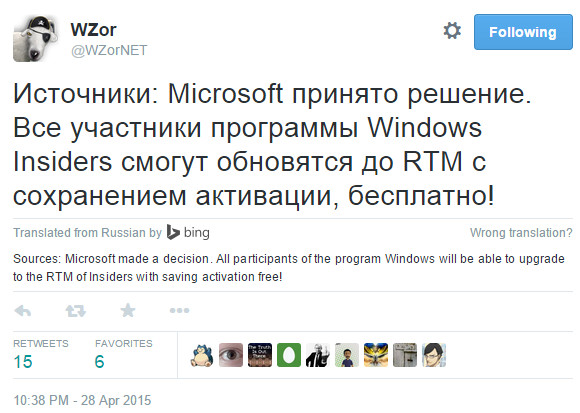 Wzor first tweeted "Sources: Microsoft made a decision. All participants of the program Windows will be able to upgrade to the RTM of Insiders with saving activation free!" roughly translated from above. 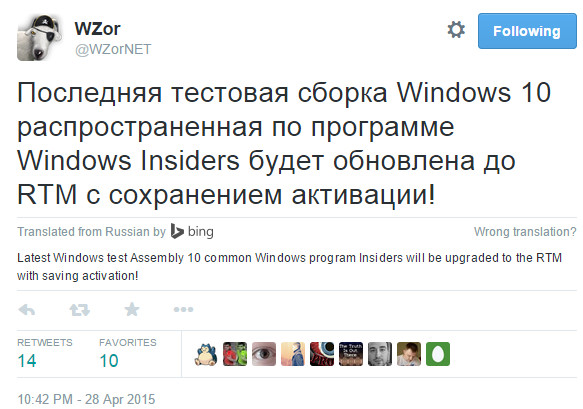 Then clarified further by tweeting the above, which translates to: "Latest Windows test Assembly 10 common Windows program Insiders will be upgraded to the RTM with saving activation!" which could mean from the rebranded build (10074) that might be released today at BUILD.

Of course, there has not been any confirmation or statements made by Microsoft themselves on this aside from the "intent" to allow Insiders to upgrade from the preview to RTM, and Gabe Aul, head of the Windows Insider Program also hasn't mentioned it. We have asked Microsoft for comment and will update this post when we hear back, but you should take this news with a pinch of salt until Microsoft clarifies either way.

Update: As expected, Microsoft is keeping quiet about any plans for now and "has no news to share" on this question yet.

Thanks for the tip WindowsUser10! from our forums.