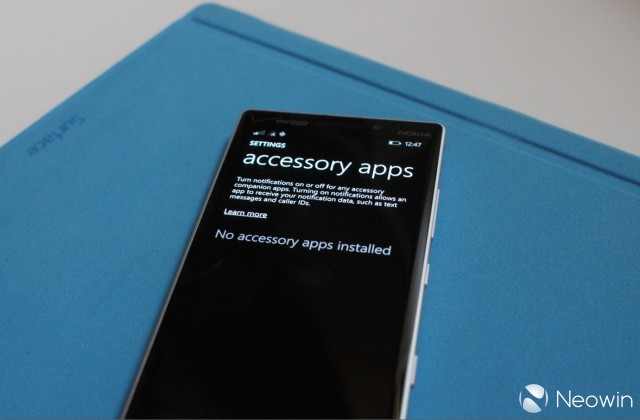 Earlier today, Microsoft began pushing out the update 1 for Windows Phone 8.1 and with it comes new information about future plans for device support. Inside the settings app on Windows Phone, there is a new area called 'Accessory Apps' that, as you would guess, is for devices like smart watches and the like.

The area is for turning off and on notifications for any accessory companion apps. By turning on notifications, this allows these companion apps to receive information such as text messages and caller ID. If you try to go further into the app, you will likely find out that you are not cool enough to enable these features and will be blocked because your user ID is not on the Microsoft approved list.

There could be lots of 'accessory apps' such as a Pebble smart watch or even Microsoft's own smart band that is expected to ship in the near future. The API for this new feature, as broken apart by Jeremy Sinclair, points to how these accessory apps can be tied closer to the OS and be used to answer phone calls, accept video calls and reject calls too, among other features. 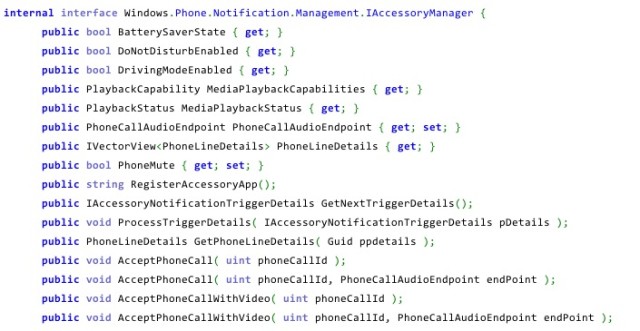 These feature were not present in the previous build and it's not hard to guess why you would want an accessory to be able to handle this type of infromation; Microsoft is paving the way for smart watch support. Sure, it may not be their smart watch as vendors like LG, Samsung and Pebble have released these devices but so far, Windows Phone support has been an after-thought.

Microsoft is expected to release a smart device for your wrist in the near future and early reports suggest that it is not a smart watch but more of a band with lots of sensors in it. As we wait to learn more about this device, know that Microsoft has already built in support for it into Windows Phone.