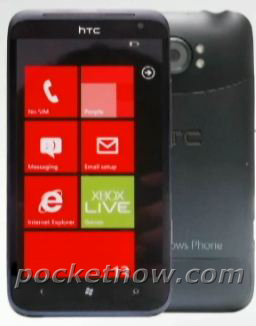 HTC has been one of the biggest, if not the biggest, hardware supporters of Microsoft's Windows Phone mobile operating system. The company released two new Windows Phone-based devices in 2011, the HTC Titan and the HTC Radar. Now the web site PocketNow.com has posted up what it claims to be a leaked picture of the next HTC Windows Phone product, the HTC Radiant.

The case of the new phone seems to be similar to that of the HTC Titan but as the article states, the front side of the HTC Radiant has a large front facing camera lens. The back side of the phone shows that the dual-LED flash has been moved to the right side of the camera compared to the Titan.

In December, the Internet rumor mill said that HTC would release a LTE-based Windows Phone sometime in February with AT&T as its wireless carrier. Has the phone been outed as the HTC Radiant via this new photo? Maybe, but we won't know for sure until sometime next week when an official announcement will be made at CES 2012.