Microsoft has clearly established Xbox LIVE as a feature that only top-quality, non-clone games can hold. Obviously most games aren’t going to make that cut – which leaves them without a central leader board and achievement system. Luckily for developers, OpenXLive has already set out to correct that. 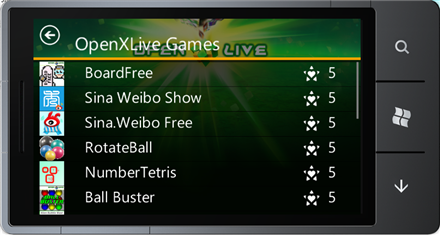 OpenXLive is basically an exact clone of Xbox Live, without the Avatars and Xbox integration. It supports Silverlight-based games, custom user pictures and achievements. Of course, such a system could also end up going cross-platform. As of today, the system now has 28,000+ users and is incorporated into 12 games already, making it quite a viable system for indie developers and others that are finding Microsoft’s official Xbox LIVE certification hard to attain. At least 40 more games are said to be in development for the system.

Of course, Microsoft could still reel these developers back in if they wanted. Microsoft could address this with a secondary layer of Xbox LIVE integration for developers of apps that don’t make the cut – perhaps called “Xbox LIVE Community”, or something similar. There, users could play games, collect achievements, etc – but have those statistics only show up on their Xbox LIVE profile on their phone, not against their global profile. Perhaps a little competition will drive Microsoft to bring even more features to Xbox LIVE for WP7?