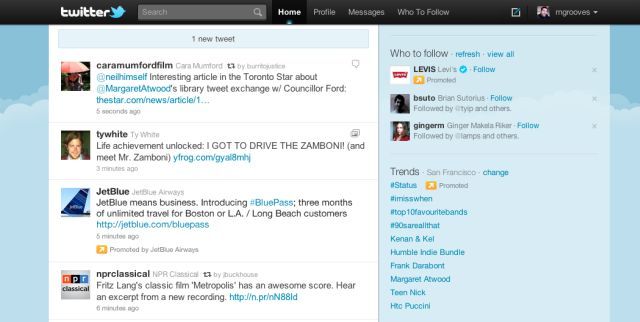 The social networking and messaging web service Twitter hasn't generated as much ad revenue as its biggest rival Facebook. However, the company announced today via its blog page a new program that will put more ads on the screens of its users. According to the blog site, "These Promoted Tweets will scroll through the timeline like any other Tweet, and like regular Tweets, they will appear in your timeline just once. Promoted Tweets can also be easily dismissed from your timeline with a single click."

Among the companies that will be a part of the Promoted Tweet program will be Microsoft's Xbox 360 division. PC maker Dell will also offer these new "tweet ads" along with companies like HBO, Gatorade, JetBlue, Starbucks and more. In addition, users might also see Promoted Tweets from non-profits such as the Red Cross and the Make a Wish Foundation.

So does that mean your Twitter page will soon be full of ads? Actually it depends. News.com reports that these tweets will only appear if you follow a company or organization that is participating in the program. AllthingsD.com also reports that if you check out Twitter via an iPhone or via a third party client like TweetDeck, you also won't see the promoted messages. All in all, this seems to be a soft launch for Twitter to launch an ad service for its customers. It will be interesting to see how Twitter users, who are used to seeing fairly light messages from celebs on the service, will react to these Twitter ad messages.