Assassin's Creed 2 became an instant favourite with many gamers when it was released just 12 months ago. It improved on the original game no end and had a great story behind it. Many fans were worried when they first heard that UBI Soft was going to be releasing another follow up to the game in a little less than 12 months.

You move silently. Swiftly. Stalking your target, striking the fatal blow and slinking back into the shadows, as if you were never even there.

You are Ezio Auditorie: Master assassin.

Live and breathe as Ezio, a legendary Master Assassin, in his enduring struggle against the powerful Templar Order. He must journey into Italy’s greatest city, Rome, center of power, greed and corruption to strike at the heart of the enemy.

Defeating the corrupt tyrants entrenched there will require not only strength, but leadership, as Ezio commands an entire Brotherhood who will rally to his side. Only by working together can the Assassins defeat their mortal enemies.

And for the first time, introducing a never-before-seen multiplayer layer that allows you to choose from a wide range of unique characters, each with their own signature weapons and assassination techniques, and match your skills against other players from around the world.

It’s time to join the Brotherhood.

The game has you following the battle of the Templars and Assassins, with the Rome period having you play as Ezio while in the modern day element you play as Desmond, Ezio’s ancestor. The story starts with Ezio beginning to take some well-earned rest after the ending to the last title. He gets to grips with things early on, by sleeping with his lover, delivering some flowers and learning how to fire cannons in training early on, but his rest is short lived. This section is more of a tutorial to those who may not have played the game before, or for those of us who just need a little memory jog. 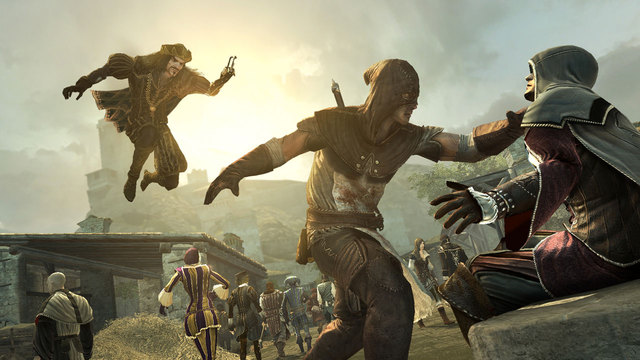 It isn’t long before Cesare Borgia (Rodrigo Borgia’s son) begins an attack on Monteriggioni, Ezio’s small town and everything Ezio had built up in Assassin’s Creed 2 is destroyed. It is a great and exciting beginning to the game and once more shows off the excellent voice work and graphics engine on show.

Ezio decides to take to Rome as he works out how to take his revenge on Cesare. The city of Rome is separated into twelve areas and each area has a Borgia tower that can be taken down. Destroying these requires you to take out the tower Captain and then burn the tower down. Doing this lessens the soldiers in the area, opens up an assassin apprentice slot and allows you to buy up and redo various businesses.

These businesses are the usual fare such as, banks, stables and more. Taking them over allows Ezio to build up his money, kind of how Assassin’s Creed 2 did with the renovation techniques it introduced. Once again the more businesses that Ezio opens, the more items you can use.

As was the case in the last game, Brotherhood has a plenty of side missions for you to take on. There are assassination contracts and the assassin tomb levels to name a few. The good news is that the tomb levels have become even better than before, with improved platform gaming on show. 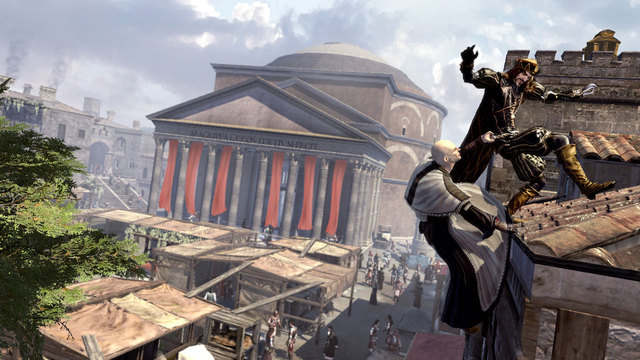 One of our favourite characters from the previous game is back. Leonardo da Vinci returns with new weapons and vehicles for you to make use of. These are items such as guns attached to a horse and cart and Leonardo’s famous paraglider that now lets you drop fire bombs from the air.

Right now everything may seem very similar to the last game, but there have been a few changes. The combat has been improved slightly with Ezio now able to kick enemies. This leaves them open for a more vicious attack. You can also now use an additional weapon too, so for example you can hit someone with sword and then shoot them for a quick combo kill. Not everything with the combat is perfect though, with the game still having the same issues with locking onto enemies that the previous game had.

You can also now take on apprentice assassins. These assassins are members of the public that Ezio has rescued after destroying the towers. They will run into the area you are in if you press the correct button on your controller and will take out your enemy for you if they can. You can’t keep selecting them over and over though, as you will have to wait for the option to warm up again after making use of it.

Assassins can also be sent off to complete missions in the game, doing this will gain them experience. The amount of experience they get depends on the difficulty of the mission they take part in. Completing these missions also brings in money for Ezio to spend. The assassin apprentice missions are short and the levels that your apprentice gains mean that they can get better armour and weapons. The idea behind all this is pretty good as it improves on the assassin system used in the previous two games. The problem is that it can make the game a little on the easy side if you do make use of them throughout the game. 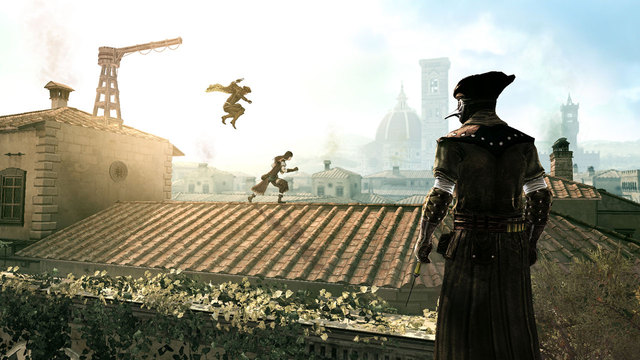 Another good improvement to the game comes in the form of looting the bodies of dead enemies. Previously when you looted them you would never find much, but now you can get crossbow ammo, poison, smoke bombs and more. However, some may say that this also makes the game too easy once more, especially due to the fact that you rarely need to spend your money to keep well-armed.

The final new main addition to the single player game is that you have to complete a special mission objective to get full synchronization. These can be objectives such as completing a mission within a certain timeframe or to not take any damage. This is one of the better new features as it adds something a little extra for those of us who like to try and get the most out of a game. You can complete missions without ever doing the side-objective, but chances are you will want to get the full 100%

There are a few other minor and useful additions such as quick-release rope lifts that helps you get up to higher sections quickly and horse riding within the cities. The single player is a lot of fun and if you enjoyed the last game you will undoubtedly like this one too. It does feel a little unpolished at times though with graphical glitches showing up now and then.

The multiplayer side of the game is where Brotherhood has seen the main features come into the fray. You play as an Abstergo agent trying to hunt down assassins. The idea is to locate and kill other players while you are already being hunted down yourself.

The game has four multiplayer modes. Wanted is a free for all, while Advance is a harder version of Wanted. Alliance has you split into pair trying to hunt down your enemy while Manhunt has you in separate teams with one team hiding while the other hunts.

We loved the multiplayer side of the game as it feels a lot different to what is out there in most other titles at the moment. It also feels like it requires much more skill than other twitch based titles.

Graphically the game is once again great looking, but it isn’t without its problems. There is still the v-sync screen tearing showing up now and again, characters can disappear into the ground, and for some reason there is some kind of haze showing in the top half of the screen. This may be by design but it can be really distracting at times. Sound however is once again superb with great music, sound effects and voice work

So overall we have yet another excellent Assassin’s Creed title. Brotherhood improves on the previous game with better combat and additional features, it does have some slight polishing issues but these could well be fixed with patches. The multiplayer modes are excellent and will bring longevity to the game once the excellent single player game has been completed.