Netflix has been toying around with offering a streaming-only plan for the past few months. In a new blog post, Netflix VP in Marketing, Jessie Becker released an update to the available Netflix plans and pricing to go along with them.

While new users, or those who only use the streaming portion of Netflix will be happy with the cheaper plan of $7.99, versus having to pay $8.99 for DVD and streaming services, those who wish to keep their DVD availablility will not be pleased. Netflix has bumped up the prices of their DVD plus streaming plans by $1 or more. 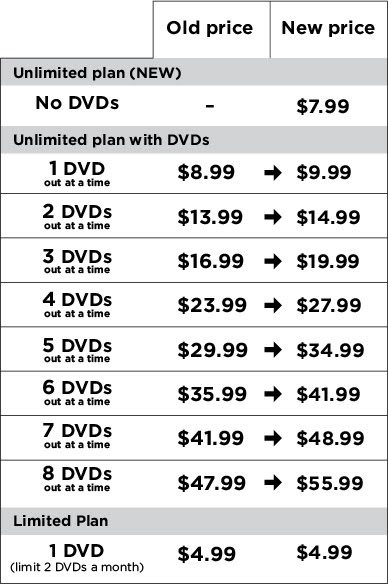 As Netflix decides to turn more to a streaming service instead of a DVD rental service, the decision to increase prices all around is to help offset the the cost and upkeep of the servers used for streaming.

Becker also addresses their reasoning behind not including a DVD-only plan, which is all some users would want. Mainly, this comes down to where the Netflix priorities are, and they have this to say:

The fact is that Netflix members are already watching more TV episodes and movies streamed instantly over the Internet than on DVDs, and we expect that trend to continue. Creating the best user experience that we can around watching instantly is how we’re spending the vast majority of our time and resources. Because of this, we are not creating any plans that are focused solely on DVDs by mail.

Hopefully, with Netflix focusing on streaming their library will increase ever more to provide an upper hand over other services. Netflix views the future as streaming-only as more internet-enabled devices appear. Adding this new streaming option will gain new users, but at the same time may push subscribers to go for the streaming-only option as Netflix transitions into a digital rather than physical media company.