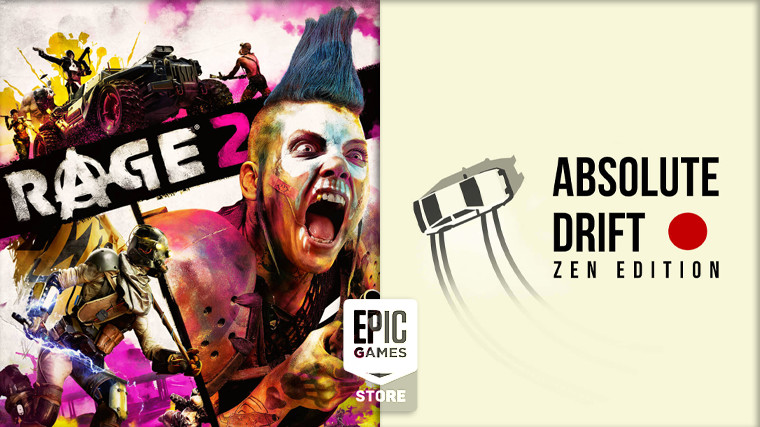 Epic Games Store has put on offer Absolute Drift and Rage 2 for this week's giveaway, taking the place of Halcyon 6.

Absolute Drift is a top-down racing title focusing solely on drifting. Originally released in 2015 to mixed reviews, the game features 34 tracks and 5 free roam areas, with various objectives that unlock more cars and tracks. Here's how the Epic Games Store describes it:

This is a drifting experience like no other. Journey from apprentice to master as you hone your skill in a gorgeous minimalist world. Push yourself to the limit on drifting tracks and wild mountain roads until you finally master the art of drifting.

Rage 2, developed by Avalance Studios and id Software, is a singleplayer open-world first-person shooter that lets players go anywhere and shoot anything in an apocalyptic world. Here's how the Epic Games Store describes it:

RAGE 2 brings together two studio powerhouses – Avalanche Studios, masters of open world insanity, and id Software, creators of the first-person shooter – to deliver a carnival of carnage where you can go anywhere, shoot anything, and explode everything.

Epic Games Store is offering Absolute Drift for Windows and macOS and Rage 2 for Windows, however the former is also available for Linux via Steam, where it's priced $5.99 at the time of writing. Here are the minimum requirements:

If you wish to claim Absolute Drift or Rage 2, you can find them here. They will be free to claim until February 25, which is when Epic will put on offer Sunless Sea for its next giveaway.