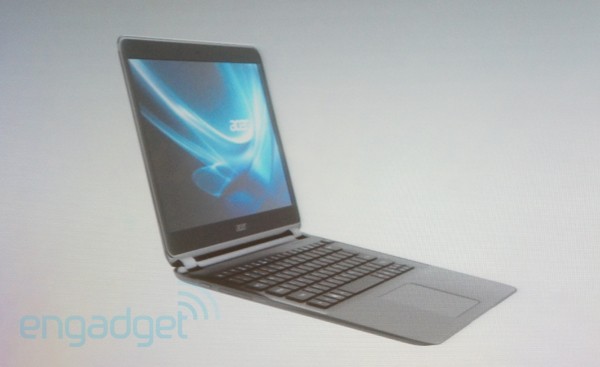 Acer is supposed to hold a press conference later today at CES 2012 in Las Vegas. However, the company apparently couldn't wait around to announce its newest product. In a press release today, Acer announced the Aspire S5, a notebook based on Intel's Ultrabook design concept. Acer says that the Aspire A5 is only 15 mm at its thickest point which it claims makes the notebook the thinnest Ultrabook yet.

The notebook weights less than 3 pounds and has a 13.3 inch screen. The company has released only a few vague bits about the hardware inside, saying it has an Intel Core processor, SSD for storage, a chiclet keyboard and a battery that Acer claims lasts three times as long as normal notebook batteries.

The chassis of the notebook has an Onyx Black color and Acer says "the Aspire S5's cover rim wraps around the system body like a protective shell. A magnesium-aluminum alloy cover and palmrest provide a slimmer and sturdier form, while the metallic brushed detail presents subtle elegance."

Pricing has yet to be announced but the Aspire S5 is slated to be released in the second quarter of 2012. That would seem to keep the notebook from being a Windows 8 launch product. Hopefully Acer will reveal more information about the Aspire S5 later today when it holds its CES 2012 press conference.

Update: Engadget has some pictures of the Aspire S5 notebook and it has also confirmed that it will have a Thunderbolt port.